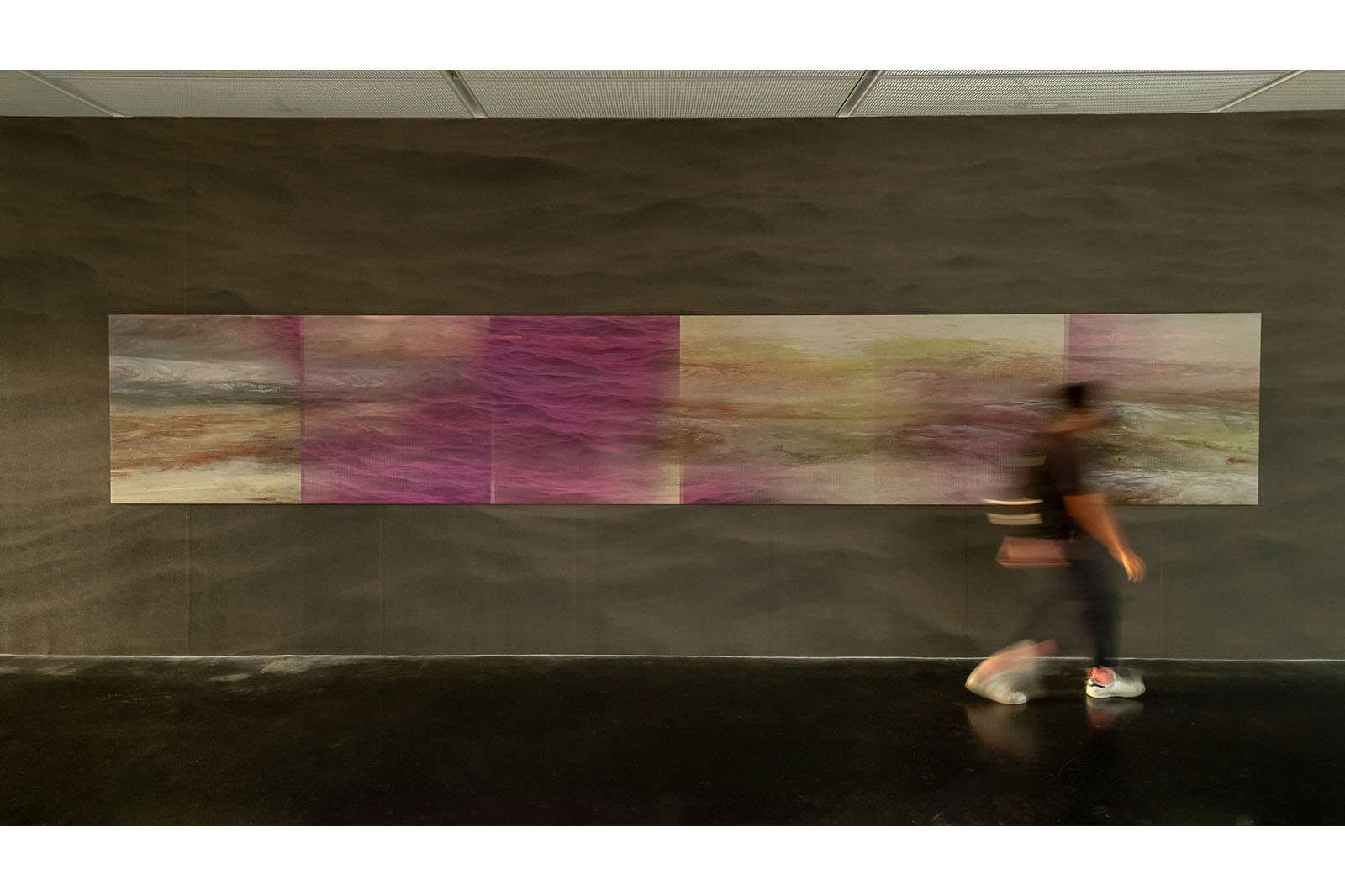 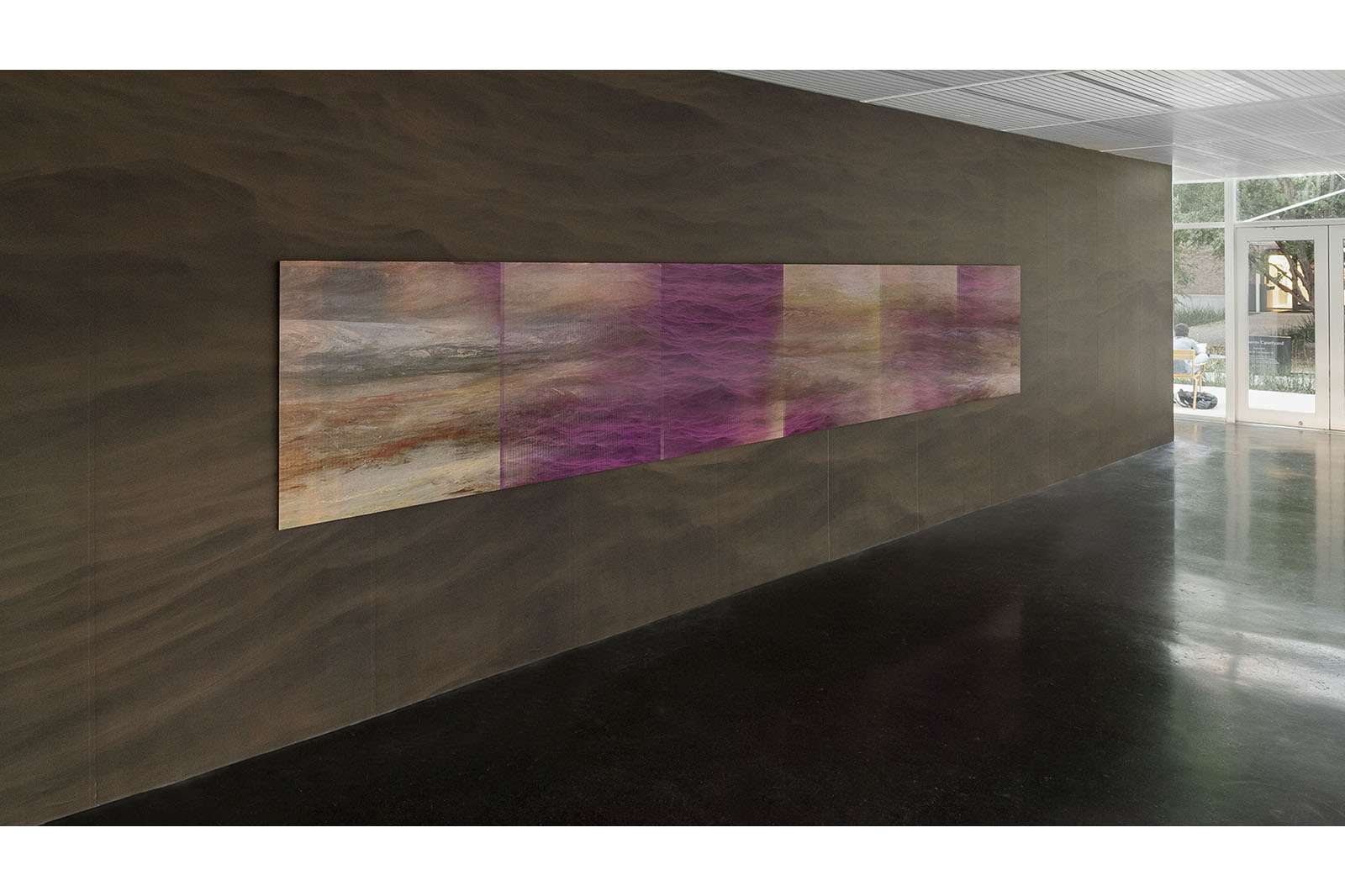 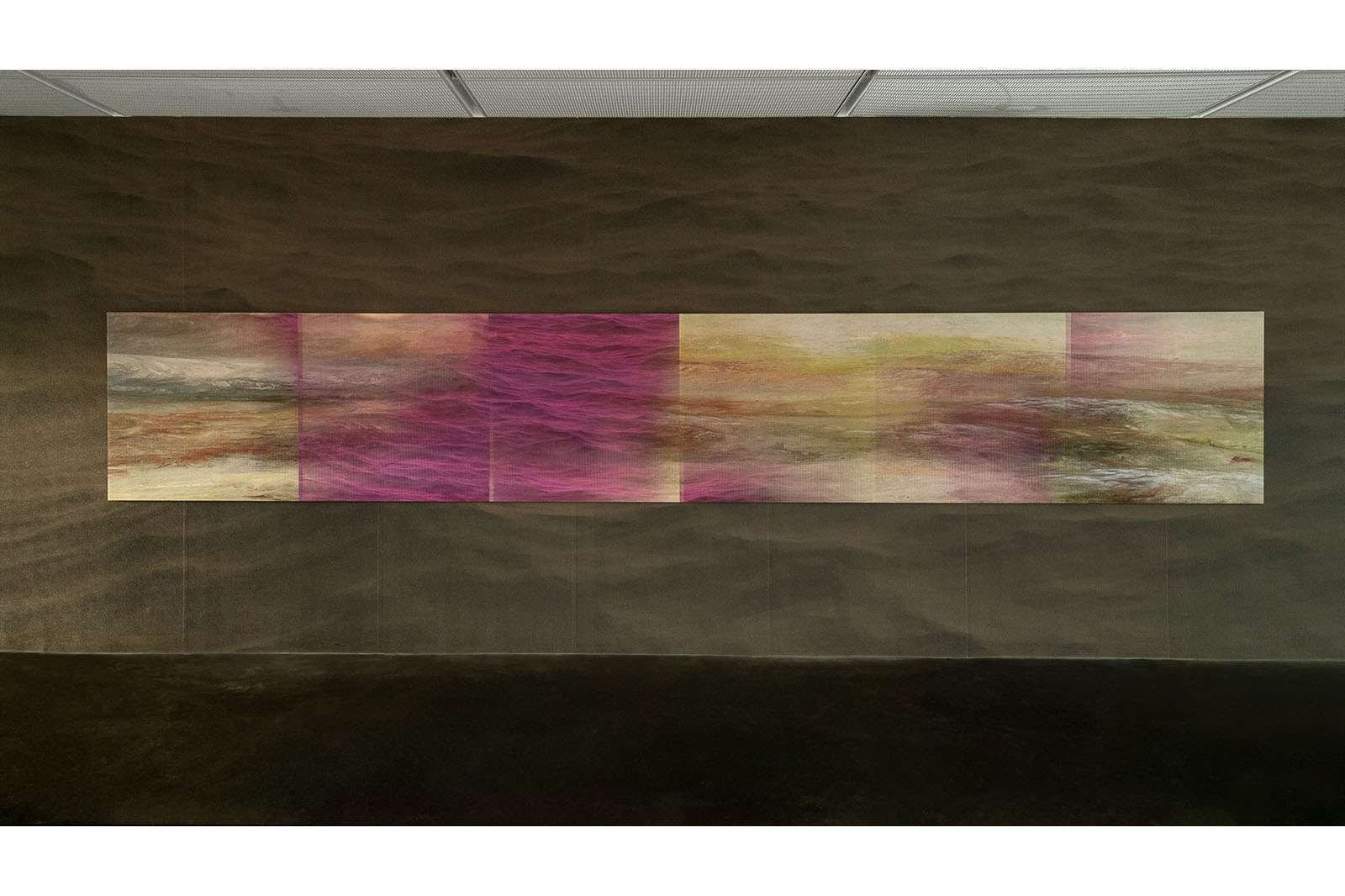 Off the Wall: Sondra Perry

Sondra Perry’s work addresses concepts of Blackness, productivity, labor, and the African diaspora, often combining her personal experiences as an African American with fictional narratives about how digital technologies can shape identities.

Ocean Modifier is a site-specific installation that addresses the centuries-old linkages between water and Black bodies. The title of the work references computer software that digitally simulates the color and appearance of water, which the artist used to create a monumental image of a murky seascape. Installed as wallpaper, the roiling sea is symbolic of the manifold ways that water is used to control, abuse, and disenfranchise Black and African Americans.

The color brown relates to Perry’s research surrounding Freedmen’s Town – the Black community founded following the emancipation on June 19, 1865, now a historic site in Houston’s Fourth Ward. Despite, and indeed because of, its propensity for severe flooding, the neighborhood was given over to Texas’ freed slaves. Examples of environmental racism such as this one prompted Perry to address how climate change has historically, and continues to disproportionately affect Black bodies, both locally and globally.

Interspersed amidst the rippling brown waves is an altered, lenticular image of J. M. W. Turner’s renowned 1840 painting Slave Ship (Slavers Throwing Overboard the Dead and Dying, Typhoon Coming On) that depicts an incident in which the captain of the British ship Zong killed more than one hundred thirty African slaves in 1781 to claim insurance money. On transatlantic voyages throughout the history of the Atlantic slave trade, it was not uncommon for Africans to throw themselves into the sea in order to escape the horrors of slavery in the Americas. Likewise, even as the denizens of Freedmen’s Town were forced to contend with sub-par land, the floodplain was still an area of freedom and selfhood. Combining two specific histories, Perry calls attention to water as a space of trauma and loss, but also as a means of liberation.

The Off the Wall series is a partnership between Rice Public Art and the Core Residency Program at the Glassell School of Art, Museum of Fine Arts, Houston. The series commissions Core residency program alumni to create site-specific installations for this space. Ocean Modifier will be on view for one year.

Off the Wall: Sondra Perry is organized by Ylinka Barotto, Associate Curator, Moody Center for the Arts.

This program is made possible through the generosity of Raymond and Susan Brochstein, Deborah Brochstein and Steven Hecht.

Public Program
On November 19, 2020, at 12:30pm Sondra Perry will participate in the Visiting Artist Lecture Series organized by the Rice’s Visual and Dramatic Arts Department (VADA) and the Center for African and African American Studies (CAAAS) in collaboration with the Moody Center for the Arts. Register for the Zoom event here.

About the Artist
Sondra Perry (b.1986, Perth Amboy, New Jersey) received a BFA from the New York State College of Ceramics at Alfred University in 2012 and an MFA from Columbia University in 2015. Perry attended the Core Program, Museum of Fine Arts, Houston in 2015–2017.

Perry’s work was exhibited in the 10th Berlin Biennial for Contemporary Art, and the Biennial of Contemporary Art, Rennes, France (both 2018). Perry was the recipient of the 2018 Nam June Paik Award. She lives and works in Perth Amboy, New Jersey.