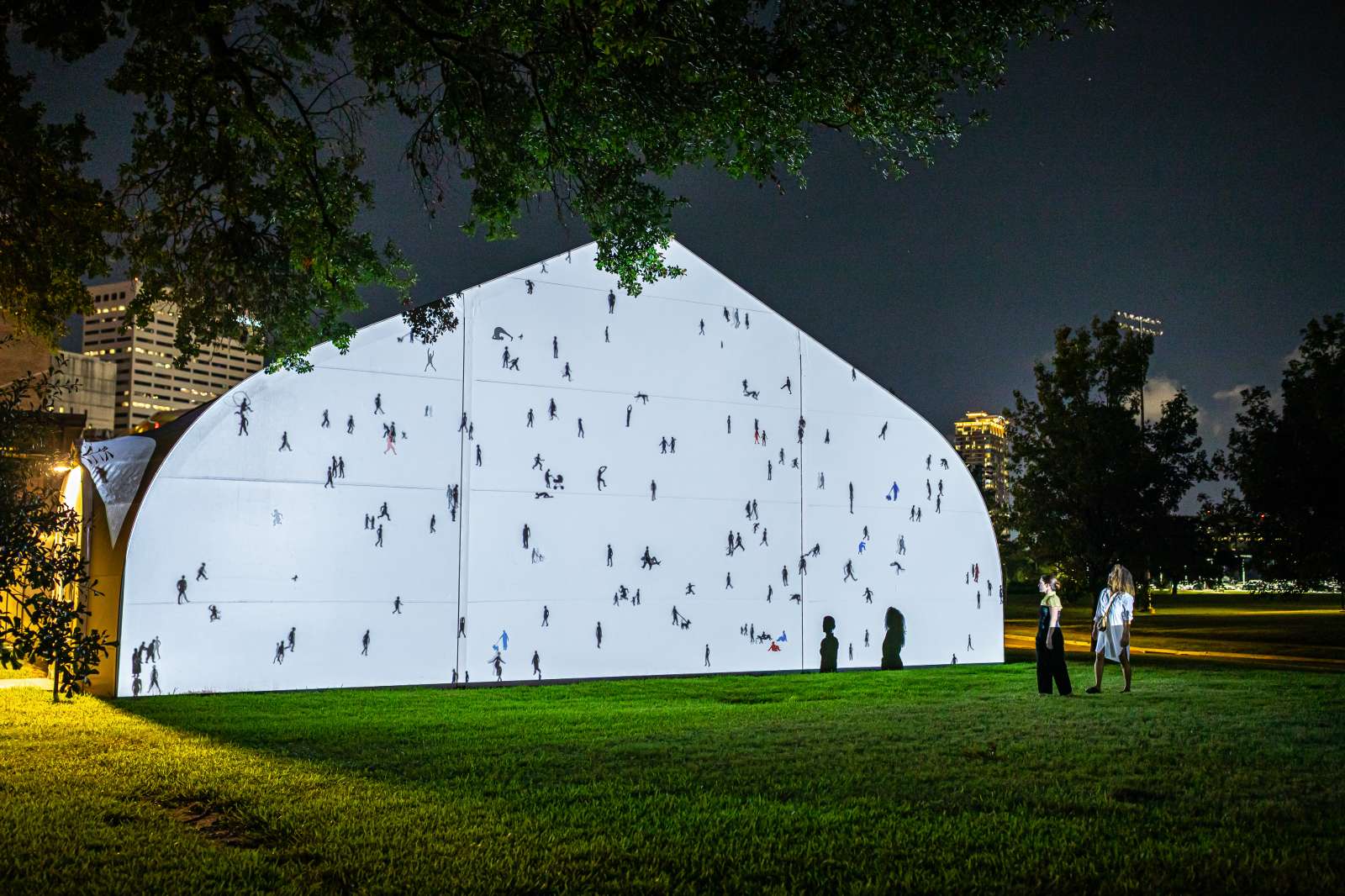 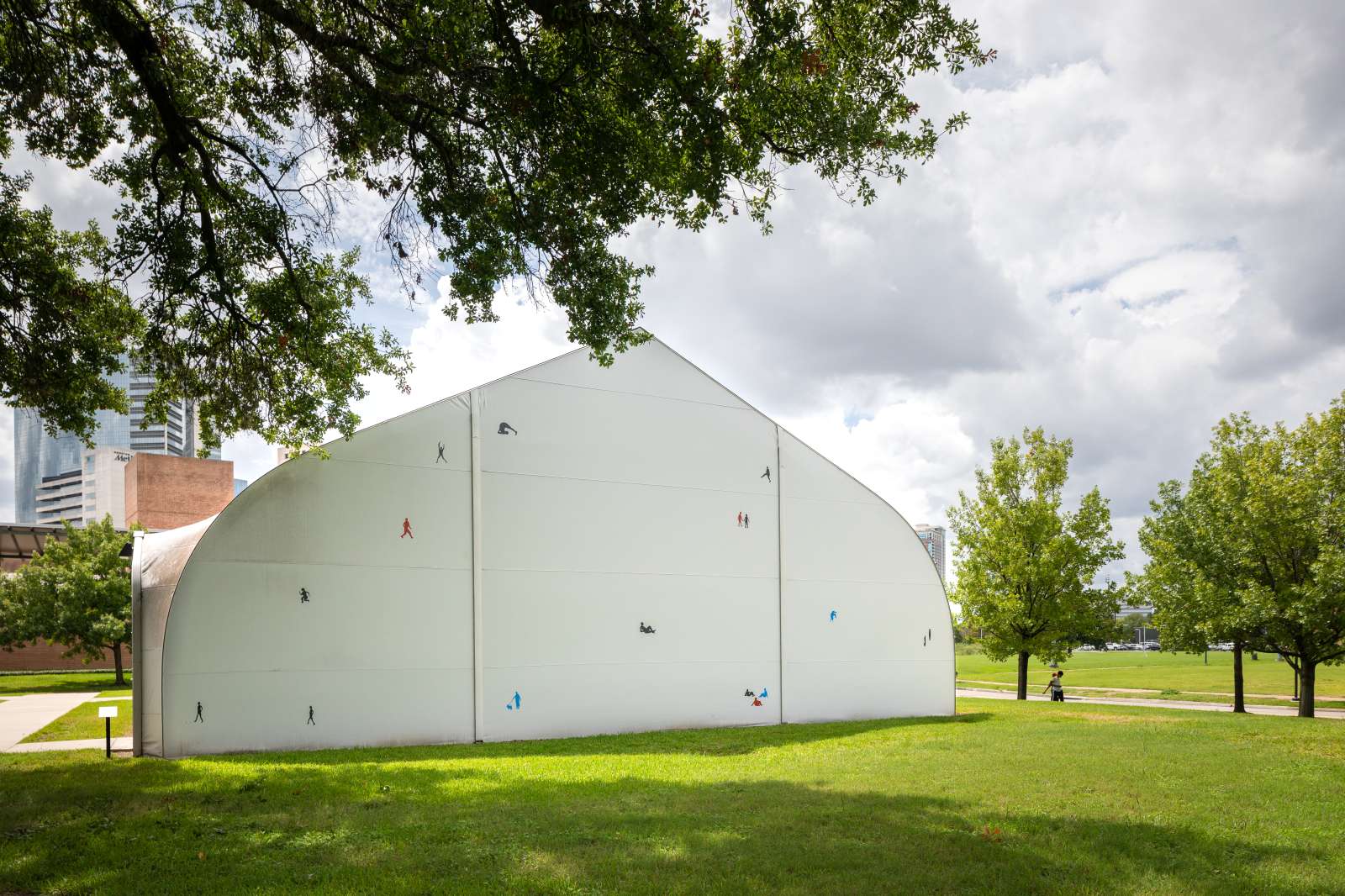 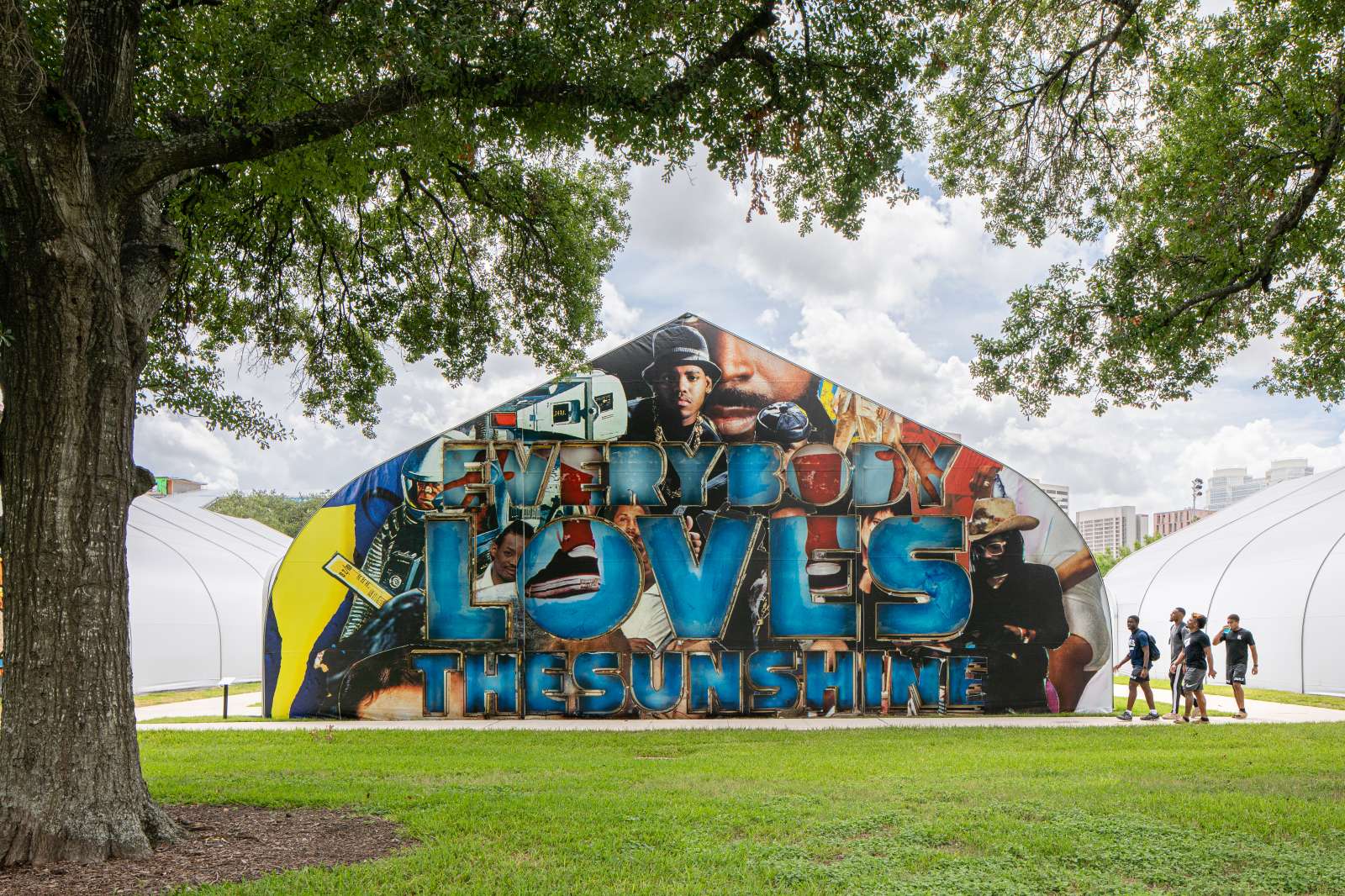 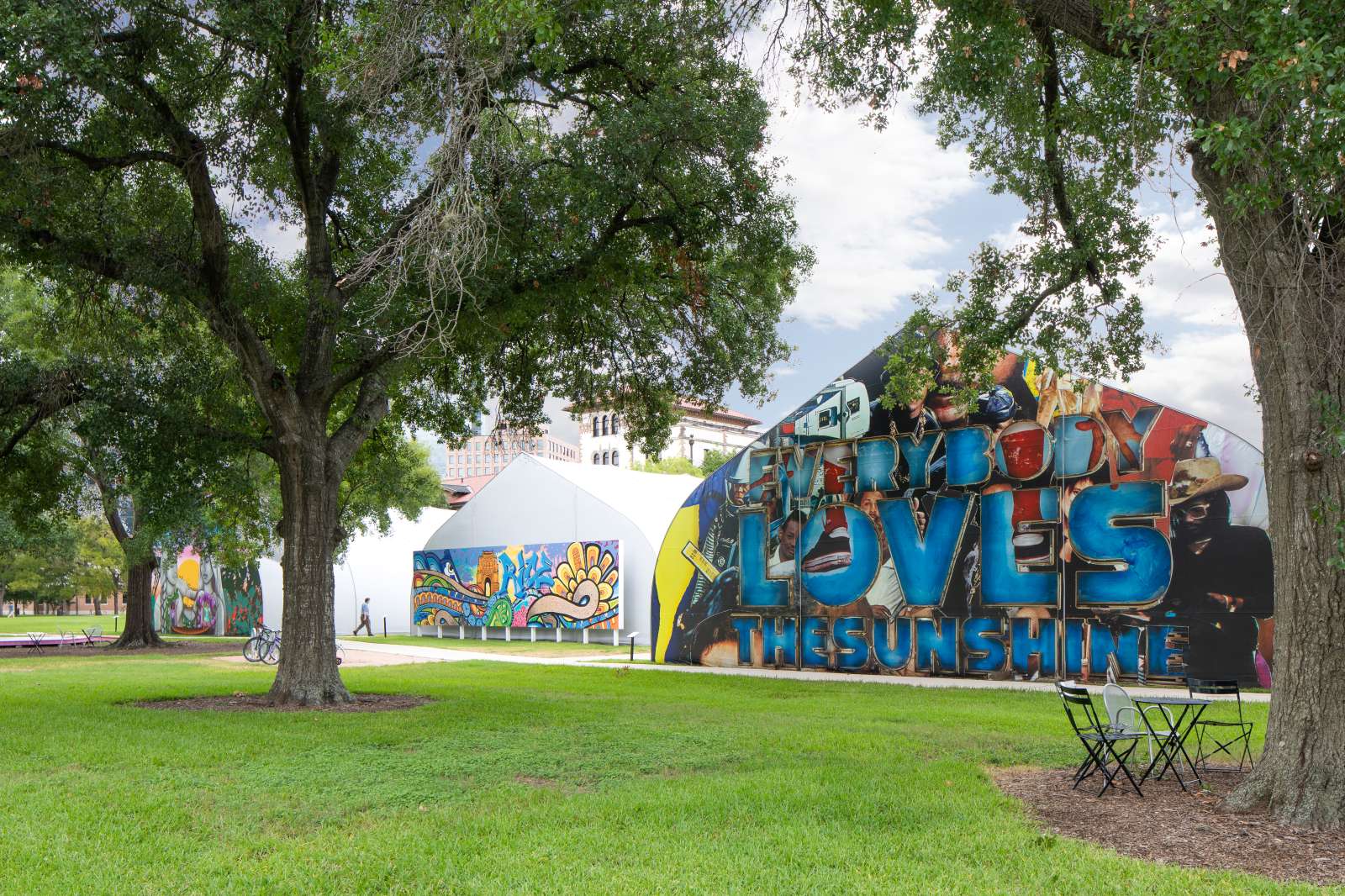 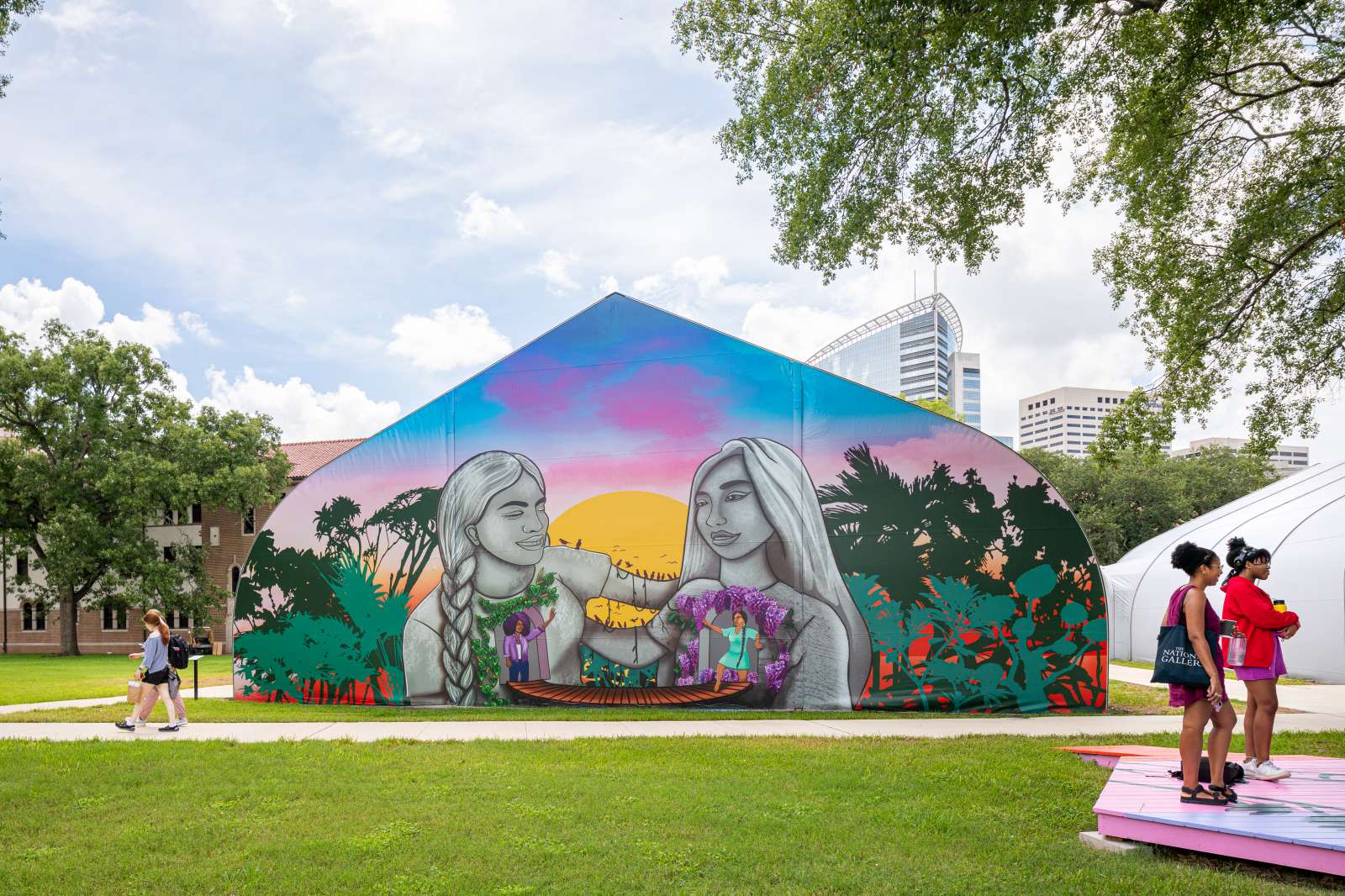 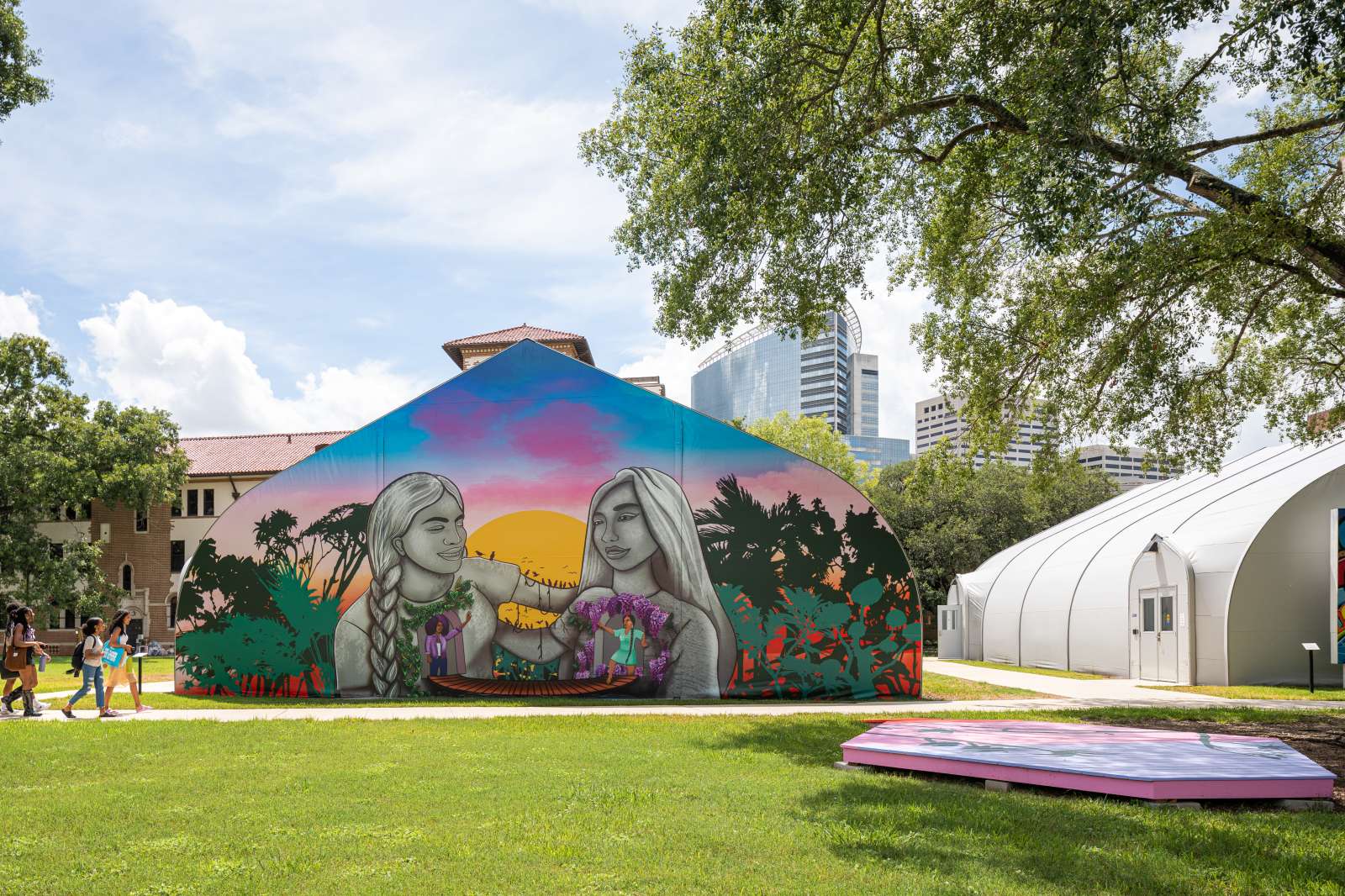 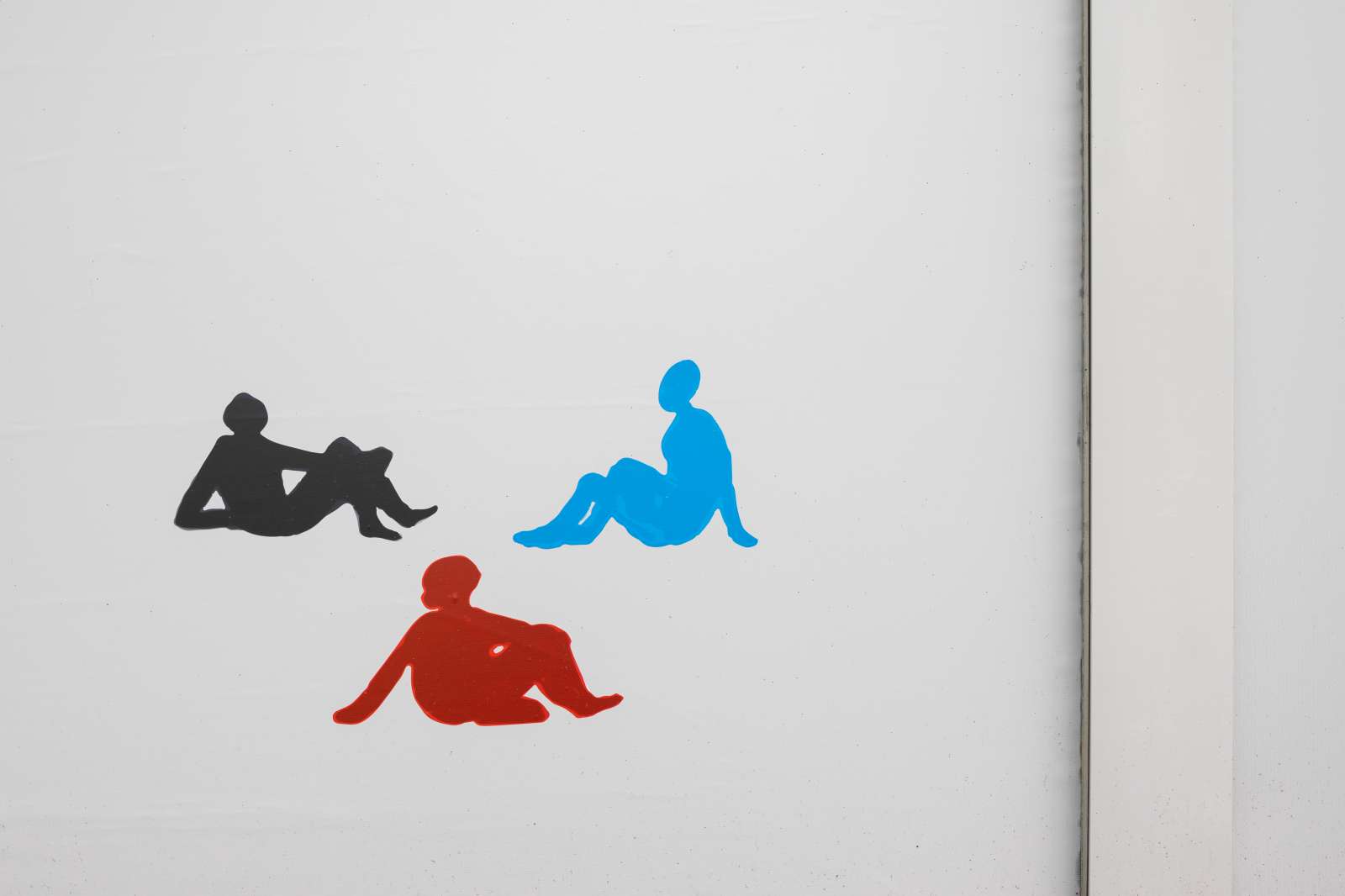 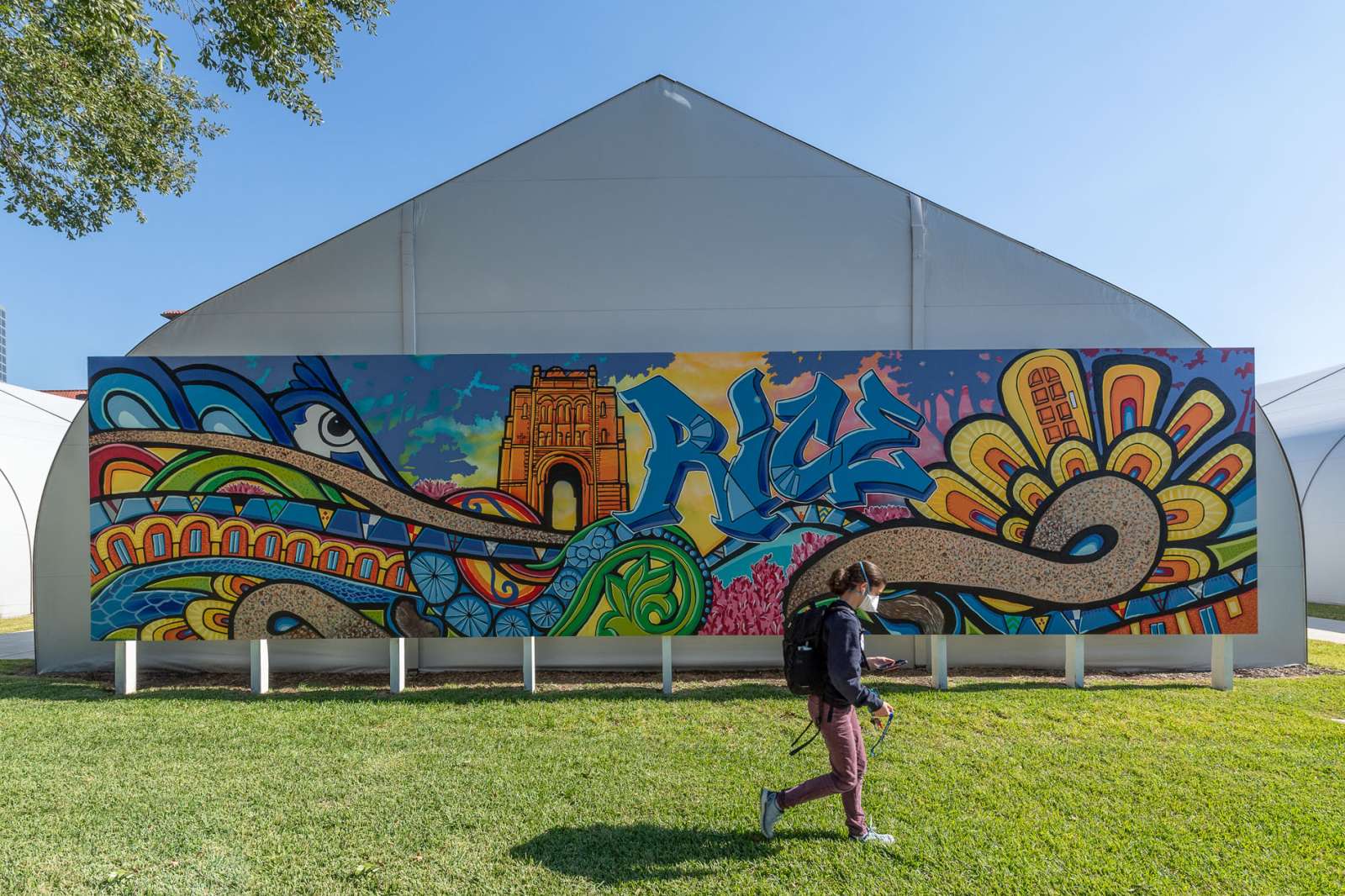 The Moody celebrated the start of the 22-23 academic year with the debut of three new temporary, public murals installed on the exterior of Rice's Provisional Campus Facilities (PCFs). Artists Robert Hodge, Hedwige Jacobs, and Royal Sumikat were commissioned by the Moody to create large-scale works that speak to ways we share and reclaim space, as well as connect as a community. These works join GONZO247, Rice Community Mural (2020), and will be on view through August 25, 2023.  Read more about each work below.

Incorporating a wide array of found materials, such as vinyl record covers, classroom maps, magazines, posters, and his own prints, Robert Hodge creates multimedia, collage-based works, alongside paintings and installations. His practice is often informed by music, excavating pop and material culture to consider intersecting histories of identity, race, and community.

Everybody Loves the Sunshine is a collage made of images the artist carefully cut out by hand from several record covers. Hodge layered these cutouts, gluing and stitching them together so that they overlap and form a dense accumulation. Using a laser cutter, he then removed sections of the compressed material to form letters that read “Everybody loves the sunshine.” The text comes from Roy Ayers’ famous 1976 song of the same name. Hodge appreciates the iconic song for its evocative power, which is both joyful and serious in melody and meaning. Ayers’ original track has been sampled numerous times, a gesture Hodge reiterates visually through his technique of appropriating and juxtaposing elements of imagery and language.

The source material for Hodge’s collage spans several decades, from the 1950s to the early aughts, referencing various histories of music and pop culture. While speaking to specific cultural moments, particularly through the representation of Black culture, Hodge’s collage allows multiple narratives to emerge, celebrating resilience and reclamation.

About the artist: Robert Hodge (b. 1979, Houston, TX) is an interdisciplinary artist based in Houston. He studied visual art at the Pratt Institute in New York and the Atlanta College of Art. His work has been exhibited at the Virginia Museum of Fine Arts, Richmond, VA; the Blaffer Art Museum, Houston; the Contemporary Arts Museum Houston; the Station Museum of Contemporary Art, Houston; Artpace, San Antonio; the Museum of Fine Arts, Houston; and the GoDown Arts Centre, Nairobi, among other venues. The artist attended the Skowhegan School of Painting and Sculpture and has received grants from the Joan Mitchell Foundation, Houston Arts Alliance, The Idea Fund, and Artadia.

This installation is made possible by Rice University’s Arts Initiative Fund and the Moody Center for the Arts.

Hedwige Jacobs creates drawings and video installations based on detailed observations of everyday life. Jacobs investigates how humans interact with each other and with the environments they inhabit, then renders these observations in a humorous way. The small, silhouetted figures are drawn in black, blue, and red, inspired by the colors of a ballpoint pen. By focusing on the figures alone, without spatial context, Jacobs depicts our social behaviors in various postures.

The figures in Personal Space are from the artist’s Tiny Drawings series. In Personal Space, the thirteen still figures, painted onto the surface, interact with various groups of animated figures projected onto the tent at night. At sunset, the mural comes to life with approximately 150 drawn figures, each of them animated to individually walk, jump, push a stroller, walk their dogs, practice yoga, jump rope, and more. The projected figures never walk the same path twice, as the routes are randomly generated by a computer. The overall image conveys the feeling of a busy beehive with its boisterous activity, while each being follows a predetermined path. The artist explains that “overall, the composition reflects the unexpected ways we move around and about, and how we try to respect each other’s personal space in a public setting.”

This installation was organized by Frauke V. Josenhans, Curator, Moody Center for the Arts.

About the artist: Hedwige Jacobs (b. 1971, Singapore) is a Dutch artist, based in Houston. She holds a BFA from the Royal Academy of Arts, The Hague, Netherlands (1994), and an MFA from the Pennsylvania Academy of the Fine Arts (2004). Her work has been shown at Women & Their Work, Austin, TX; Box 13 ArtSpace, DiverseWorks, Lawndale Art Center, and Sawyer Yards in Houston, TX; the Amarillo Museum of Art, Amarillo, TX; and The Drawing Center in New York, NY; DAiS at Galeri Utama and ION Art Gallery in Singapore. Her work is in museums, and private and corporate collections such as the Museum of Fine Arts Houston, TX; The Netherlands Embassy in Singapore; Ernst & Young; and VSB in The Hague, Netherlands. Jacobs's work was part of a public art installation at The Discovery Green Conservancy in Houston in 2020, and it was featured in CURRENTS New Media, Santa Fe, in 2022.

Royal Sumikat’s work is informed by her personal experience as an immigrant to the United States, navigating both American culture and her native Filipino heritage. Her art echoes the community relationships she has built in her career and personal life. Sumikat uses her artworks to connect with others and to emphasize the healing power of art. She produces murals, paintings, and drawings, made with vibrant, saturated colors, that are inspired by various elements, ranging from the human body and nature to mythology and spirituality. Sumikat’s visual language is based on storytelling, connecting the past with the present and future. Her retro-futuristic murals investigate topical questions of identity.

A Home in Each Other reflects the importance of building community and social interaction, be it on campus or elsewhere. The two large figures are humanoid cement houses that symbolize community. These figures shelter and protect the two smaller figures who emerge from the heart area. The bridge that connects them is a metaphor for how a smile and a gesture can initiate a connection between individuals and how personal connections are strengthened by serving and being responsible for our communities and individual relationships. The surrounding flora and fauna echo those of Houston, as well as those of the artist’s native Philippines, conveying harmony between the built and natural environment, and embodying fertility and growth.

This installation was organized by Frauke V. Josenhans, Curator, Moody Center for the Arts.

About the artist: Royal Sumikat (b. 1985, Makati, Philippines; lives and works in Houston) is a multimedia artist. She is the recipient of the 2020 Artist INC Fellowship, and her works have been featured in the FxAH group show for the Texas Biennial, the Lumikha Arts Showcase We Have Begun, and the Filipinx Film Night, Inaugural FxAH Art Event at Rice University, among others. She was part of the Artists on Site program at Asia Society Texas, 2020-21. Her murals can be found in and around Houston.