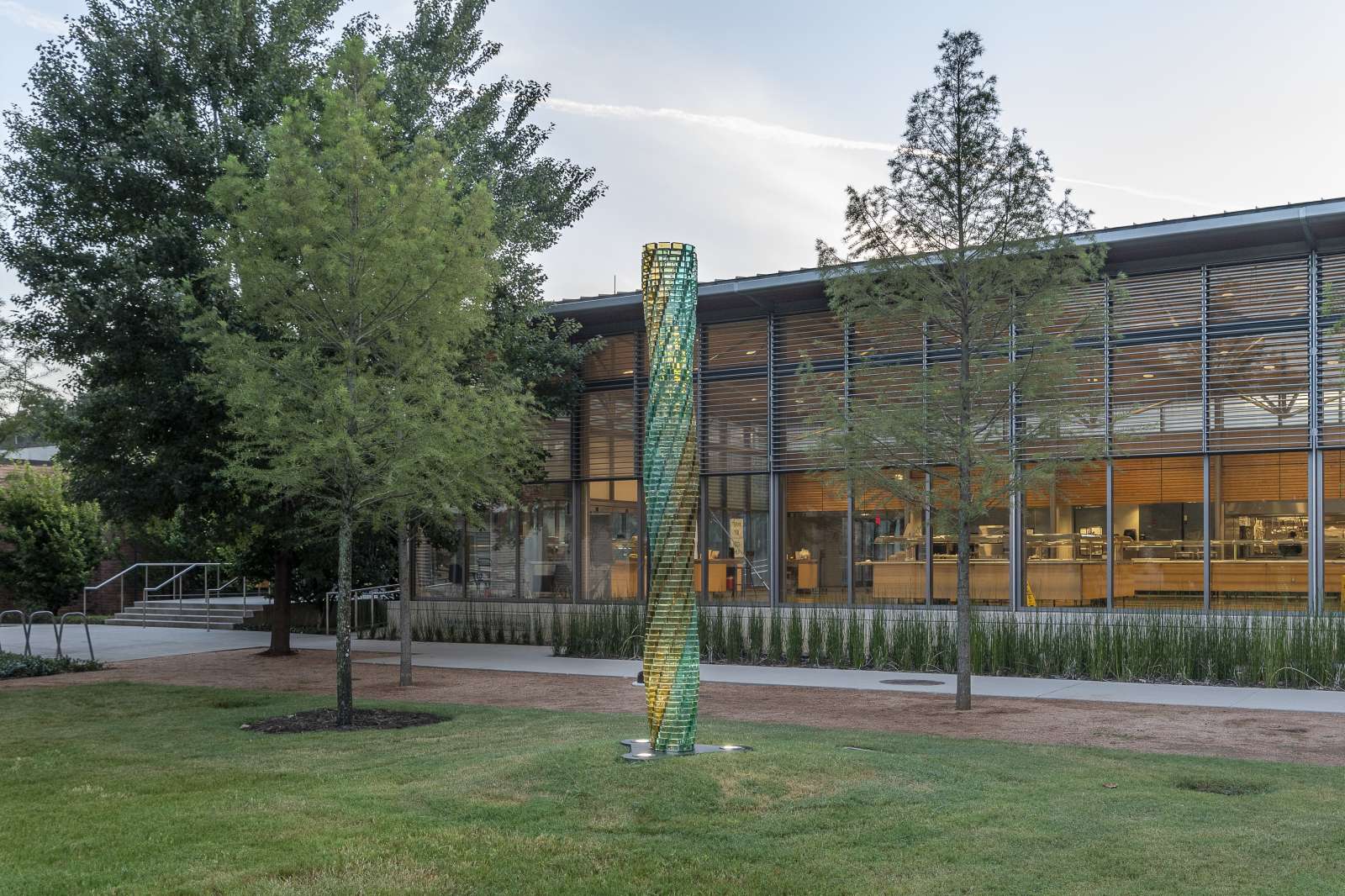 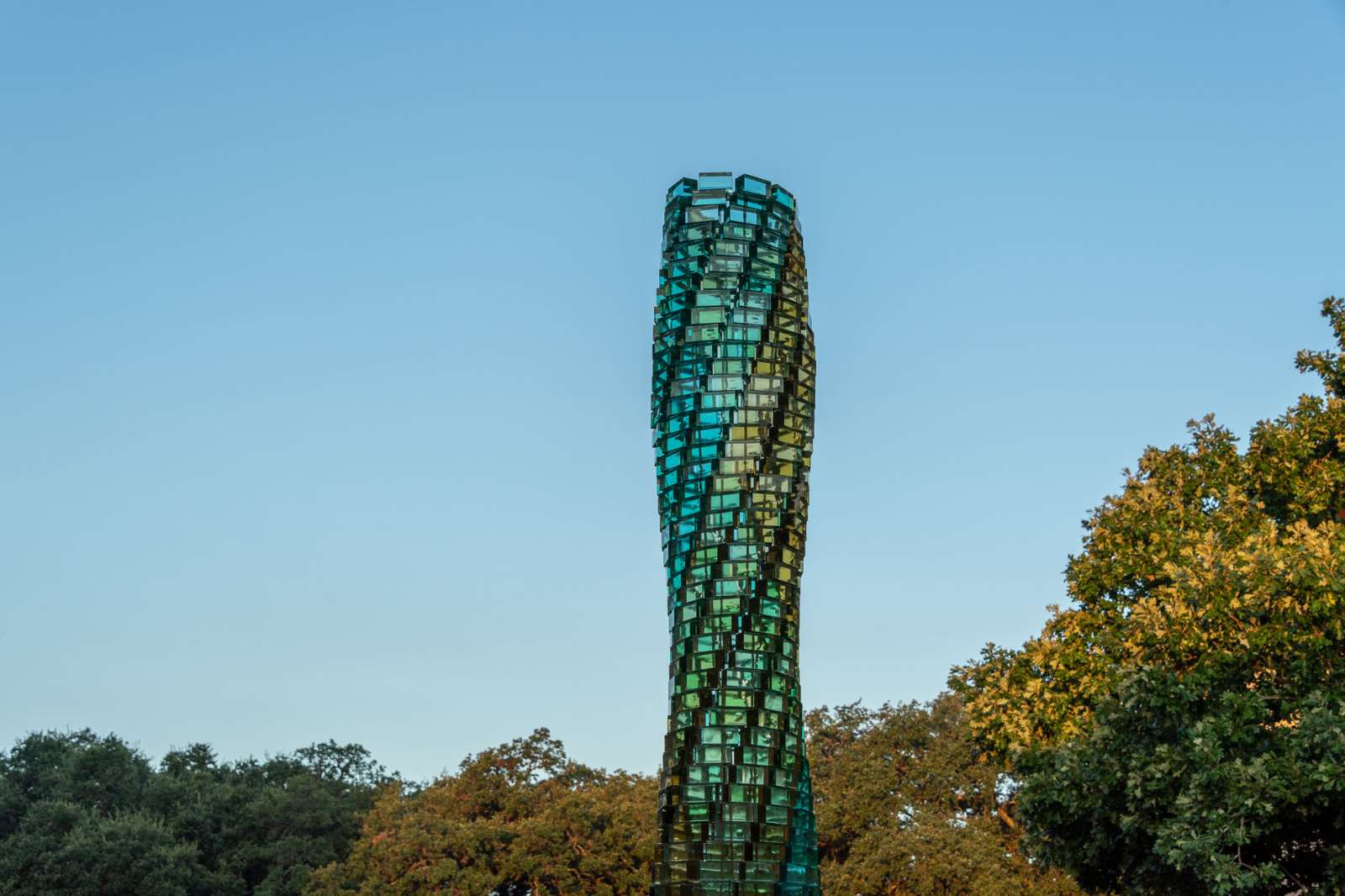 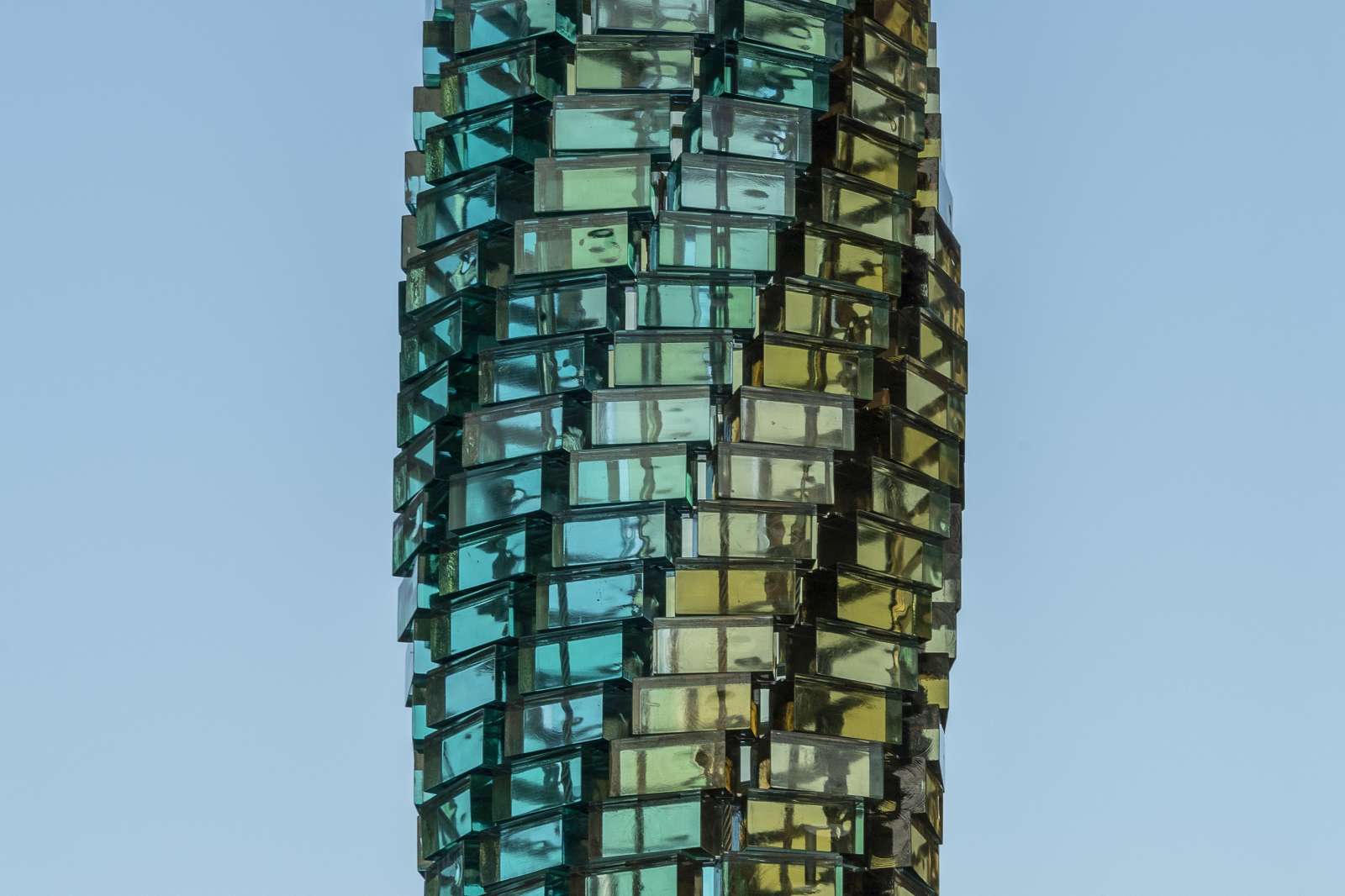 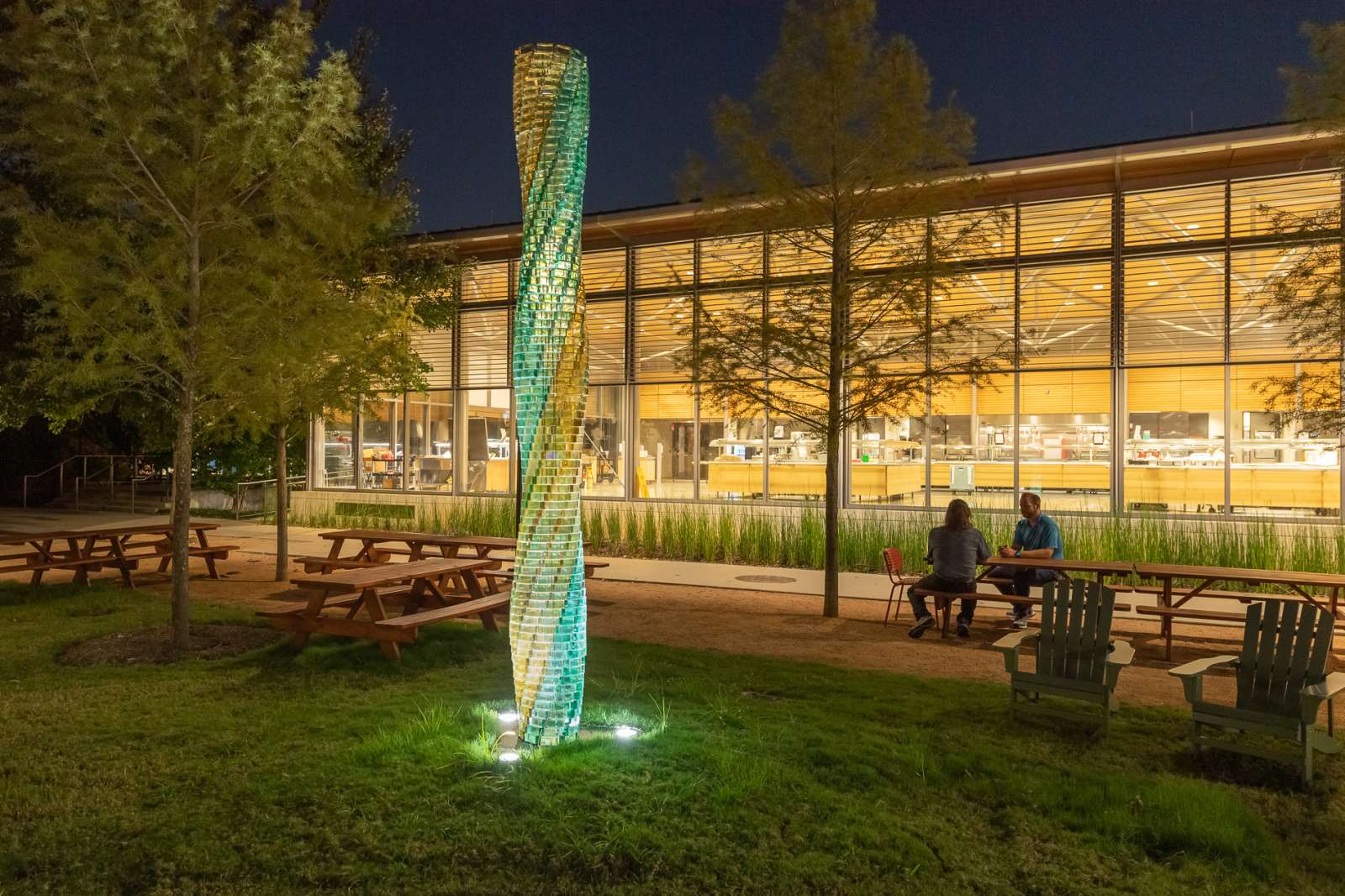 Lawn next to Sid Richardson College

Shirazeh Houshiary’s multidisciplinary practice spans sculpture, painting, installation, and video art. Her work is inspired by a multitude of sources ranging from poetry, Islamic art and architecture, Renaissance painting, neuroscience, and mathematics, to nature. Houshiary seeks to capture and visualize intangible or ephemeral phenomena, echoing the ever-changing character of our physical reality. Her recent sculptures—with repetitive, rhythmic configurations of bricks—conjure transparency and opacity, and convey continuous movement inspired by nature.

Upon visiting Rice University in early 2020, Shirazeh Houshiary was drawn to the light of the Texas sun and how it filters through the canopy of oak trees on the grounds. Looking closely at the architecture on campus and the prevalence of handmade, clay bricks, she chose to create a tower constructed from blue and green glass bricks, handmade in Murano, Italy. Twisting in a helix-like form to a height of more than ten feet, the glass sculpture references both the light and ever-changing colors of the Texas sky and the man-made world that surrounds us. The title Seif refers to the long, narrow sinuous ridge of sand at the crest of a dune created by the wind. These same directional forces are embodied within the sculpture, where centripetal and centrifugal movements rise and fall.

According to the artist, “the opaqueness of the work fosters separation and shadow, while its transparency offers connectedness through visibility and light. The desire for simultaneous visibility and invisibility, materiality and immateriality, presence and absence are characteristics of the human psyche and can nurture dream-like images, like those that dwell in glass.”

Located on the lawn adjacent to Sid Richardson College on the east side of campus, the work filters the sunlight as it moves across the sky and is lit from below at night, creating a softly glowing beacon for students and visitors to the area. Sited according to the artist’s wishes, Seif is installed in a harmonious dialogue with the surrounding trees.

About the artist: Shirazeh Houshiary (b. 1955, Shiraz, Iran) moved to London in 1974, studied at the Chelsea School of Art in 1976–79 and became a junior fellow at Cardiff College of Art in 1979–80. She rose to prominence in the 1980s as part of the New British Sculpture movement. She was nominated for the Tate Gallery’s Turner Prize in 1994. Her works are included in various national and international collections such as The Metropolitan Museum of Art, New York; The Museum of Modern Art, New York; Solomon R. Guggenheim Museum, New York; Sydney and Walda Besthoff Sculpture Garden at the New Orleans Museum of Art, New Orleans; Centro per l’Arte Contemporanea Luigi Pecci, Prato, Italy; Centre Pompidou, Paris; Tate Modern, London; and the British Council Collection, London. She has shown in numerous biennials and group exhibitions, notably Artists and the Rothko Chapel: 50 Years of Inspiration at the Moody Center for the Arts (2021). Among other notable achievements are a commission for the East window of Saint-Martin-in-the-Fields in London, 2008, and her exhibition Breath, a collateral event of the 55th Venice Biennale in Italy, 2013. Houshiary lives and works in London.