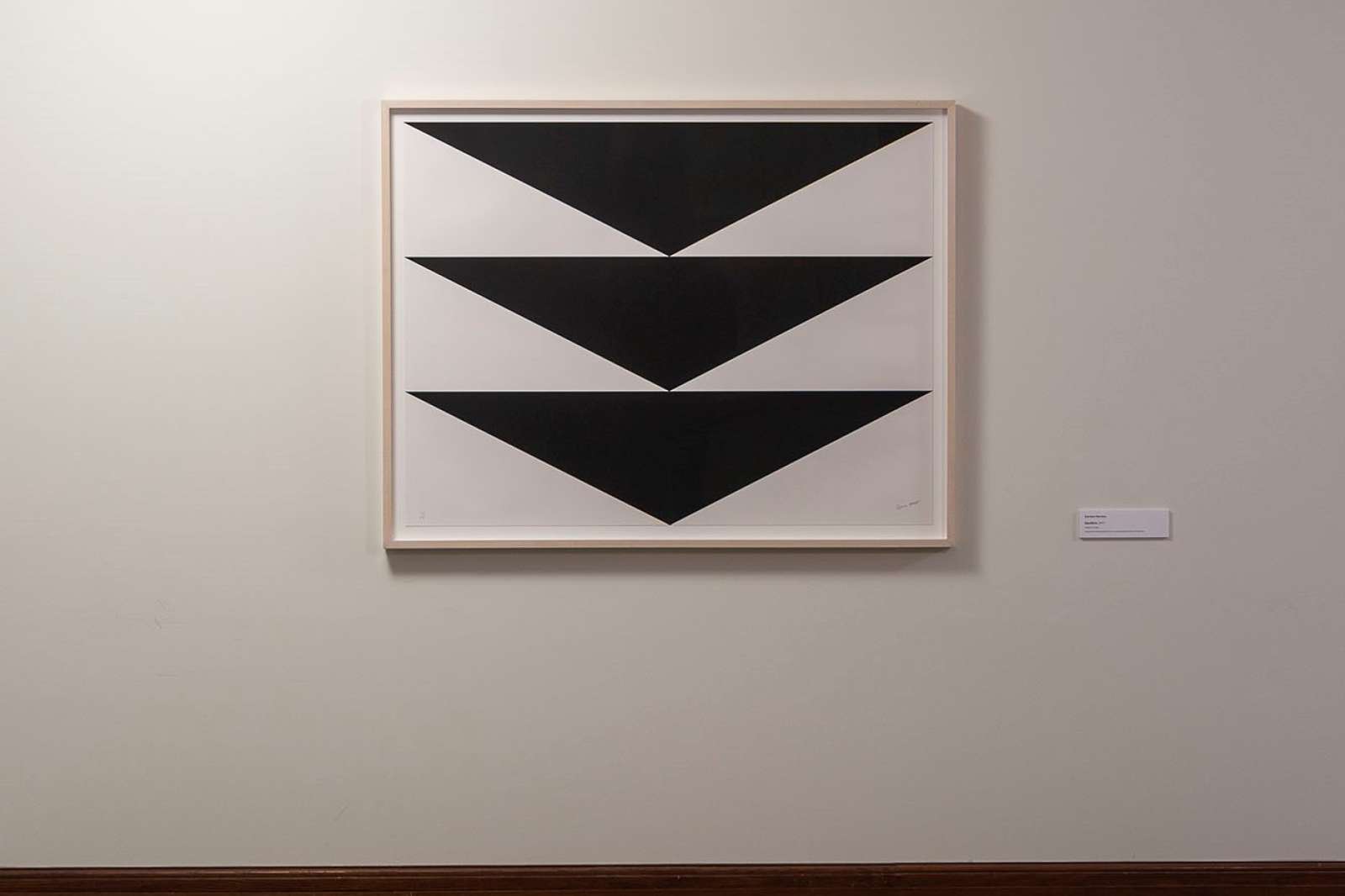 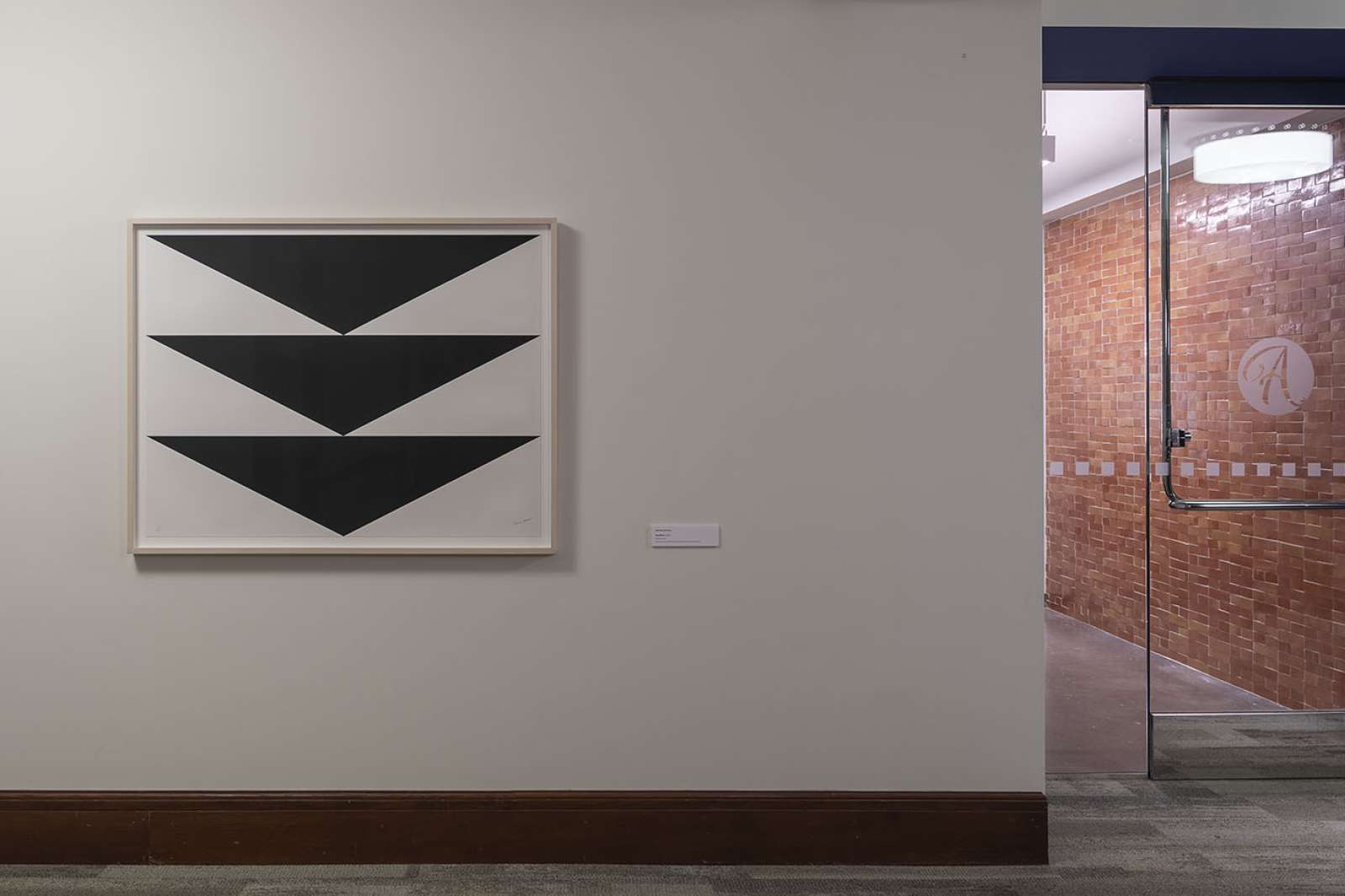 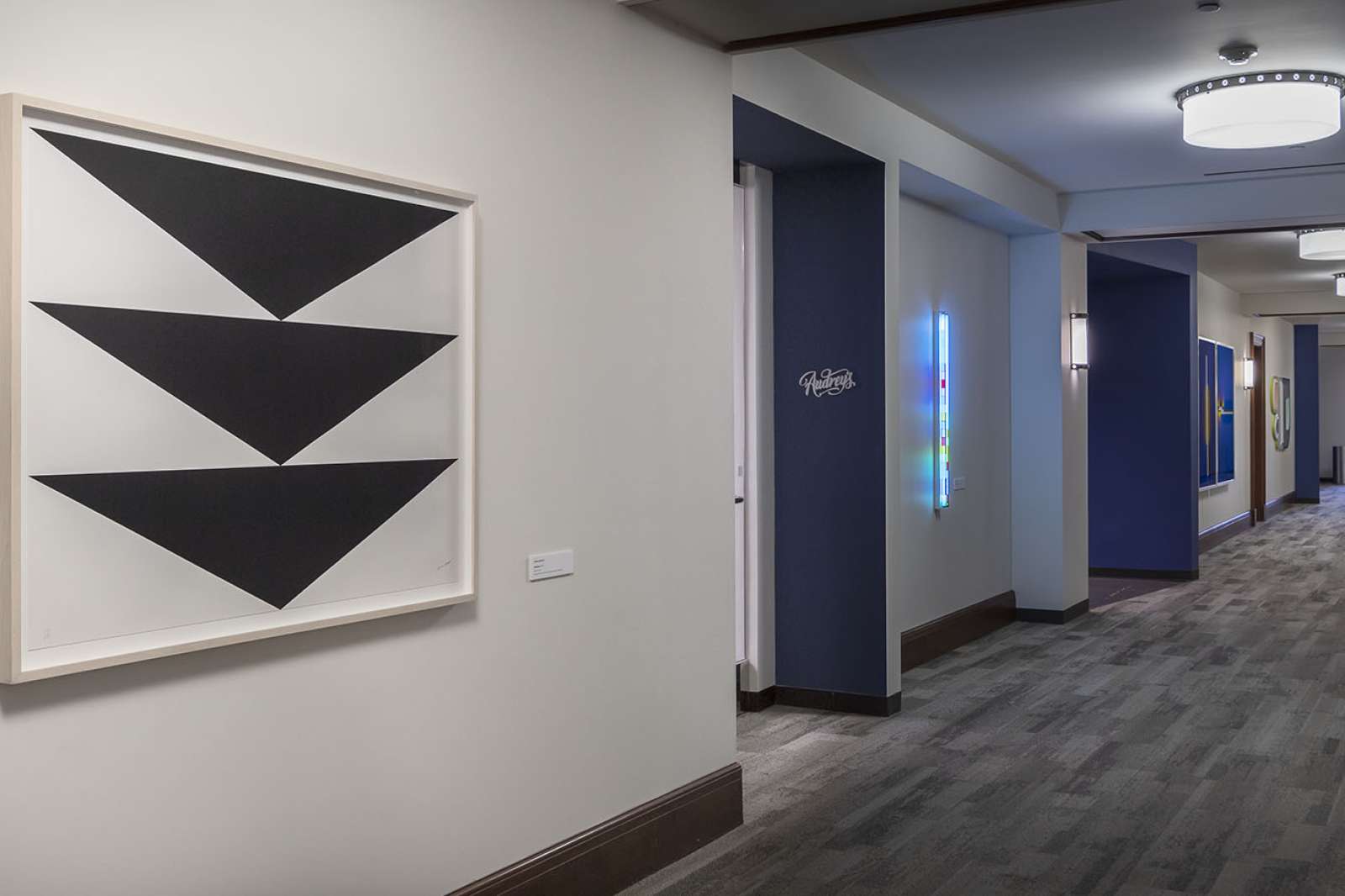 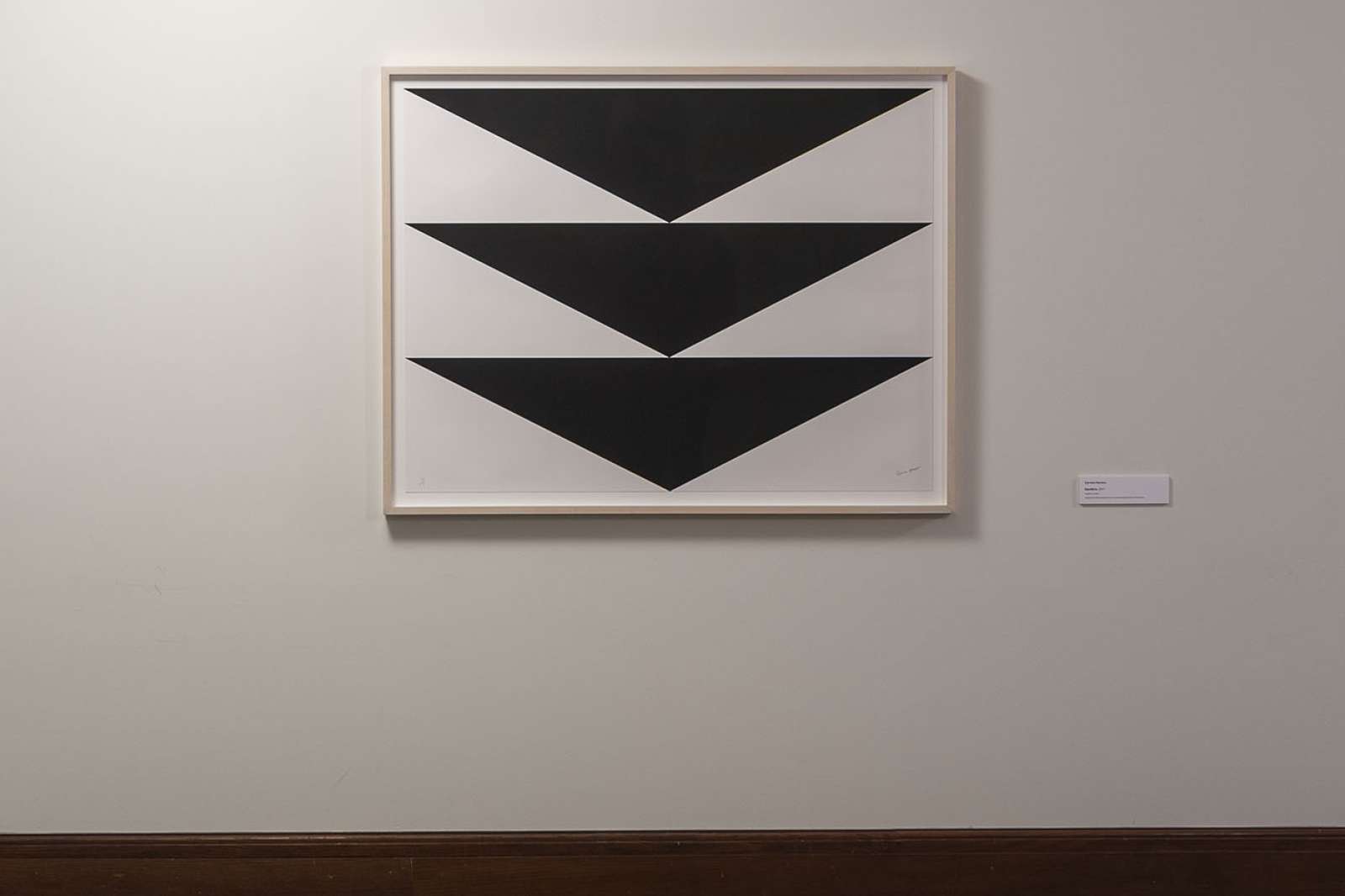 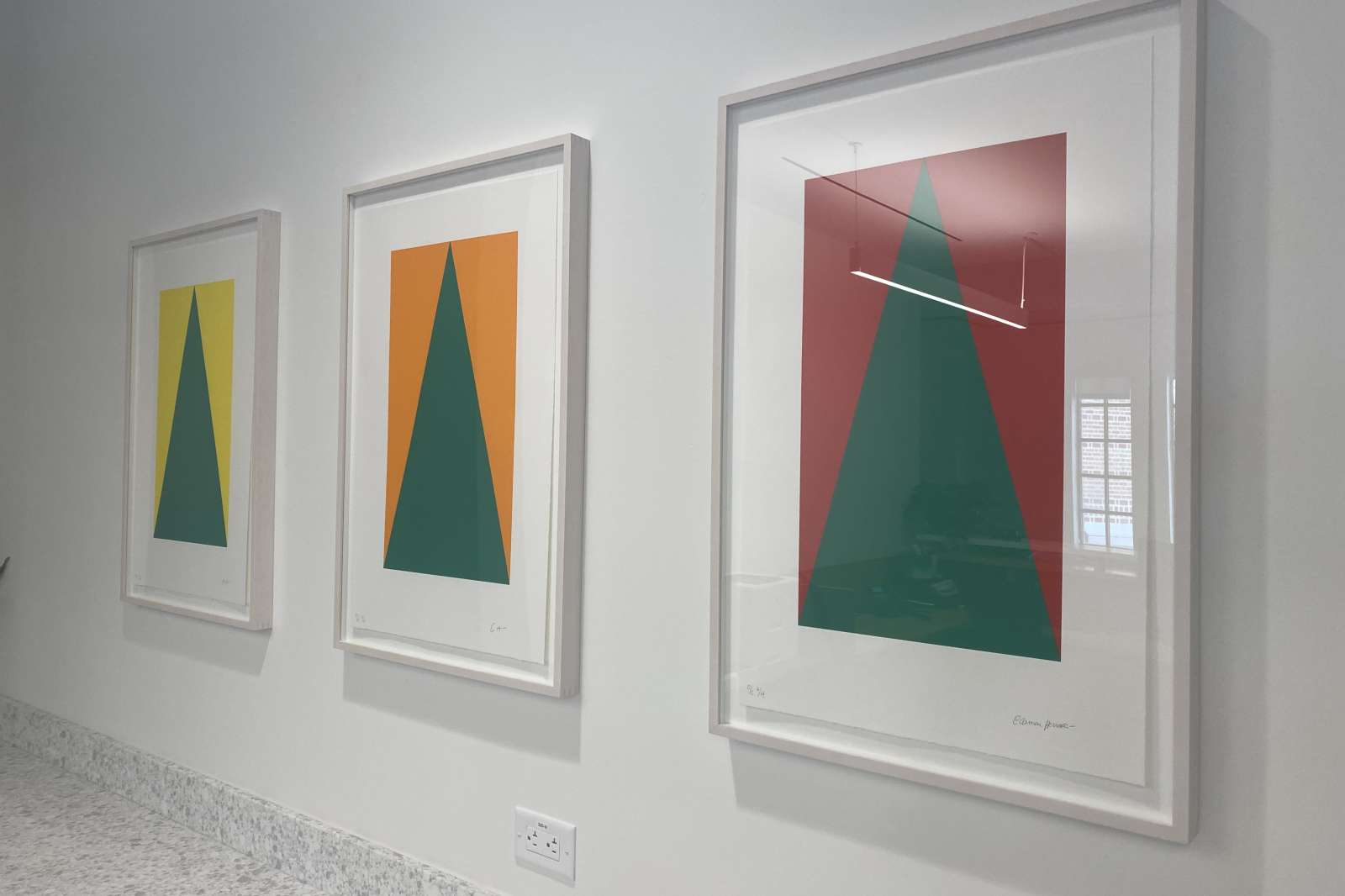 Celebrated as a groundbreaking artist of geometric abstraction, Carmen Herrera explored the relationship between color and geometry over the course of her eight-decade career. Depicting spatial tensions through minimalist means based on symmetry, asymmetry, color and rhythm, Herrera developed a powerful visual language. Merging formal simplicity with chromatic contrast, Herrera excised non-essential elements in her paintings, sculptures, and prints to emphasize pure form stating, "My quest is for the simplest of pictorial resolutions." Drawing from both Latin American and Western art traditions, Herrera produced a cross-cultural interpretation of modernist abstraction.

Equilibrio captures core aspects of Herrera’s style with its sharp, simple forms and reductive palette. Herrera’s interest in symmetry and rhythm is made manifest through the print’s stacked triangular motif that extends to the edge of the sheet. The three central black triangles suggest a continuous downward motion, creating a smaller, symmetrical set of white triangles on both sides of the composition. The difference between the black shapes and white ground is balanced; the composition thus embodies a perfect “equilibrium.”

Untitled reflects the artist’s interest in pattern, color and shape, foregrounding the isosceles triangle in green, with the contrasting negative spaces printed in yellow, orange and red. The two equal converging sides of the central green triangles simultaneously create boundaries for the inverted, lateral right-angle triangles. The color orange is made from a mixture of yellow and red, so Hererra placed that print in the center, a separate but related version of the other two impressions. Shown together, the three lithographs illustrate how Herrera explored variations on a compositional theme, demonstrating how subtle adjustments have a powerful impact on the visual perception of a single work of art.

About the Artist: Carmen Herrera (b. 1915, Havana, Cuba, d. 2022) studied architecture at the Universidad de La Habana, Havana, Cuba and then enrolled at the Art Students League in New York. She spent time in France and exhibited at the Salon des Réalités Nouvelles and at the Musée d’Art Moderne de la Ville de Paris in the 1940s and early 1950s. Herrera settled permanently in New York in 1954.

Herrera has been featured in numerous exhibitions across the United States and Europe, including a solo retrospective at the Whitney Museum of American Art, New York, Carmen Herrera: Lines of Sight (2016). Among her other exhibitions are Epic Abstraction: Pollock to Herrera (2018-2020) at the Metropolitan Museum of Art, New York, Carmen Herrera: Structuring Surfaces (2020-2021) at the Museum of Fine Arts, Houston, and Women in Abstraction (2021) at the Centre Pompidou, Paris. Her Estructuras Monumentales, a series of monumental aluminum sculptures that she conceived in the late 1960s and 1970s, was first shown at City Hall Park in New York in 2019, and then exhibited at Buffalo Bayou Park in Houston in 2020-21. Her work is in the collections of numerous public institutions, including the Museum of Modern Art, New York, the Whitney Museum of American Art, New York; the Metropolitan Museum of Art, New York; NY; the Hirshhorn Museum, Washington DC; the Pérez Art Museum, Miami, FL; Kunstsammlung Nordrhein-Westfalen (K20), Düsseldorf, Germany; and the Tate Collection, London, UK.