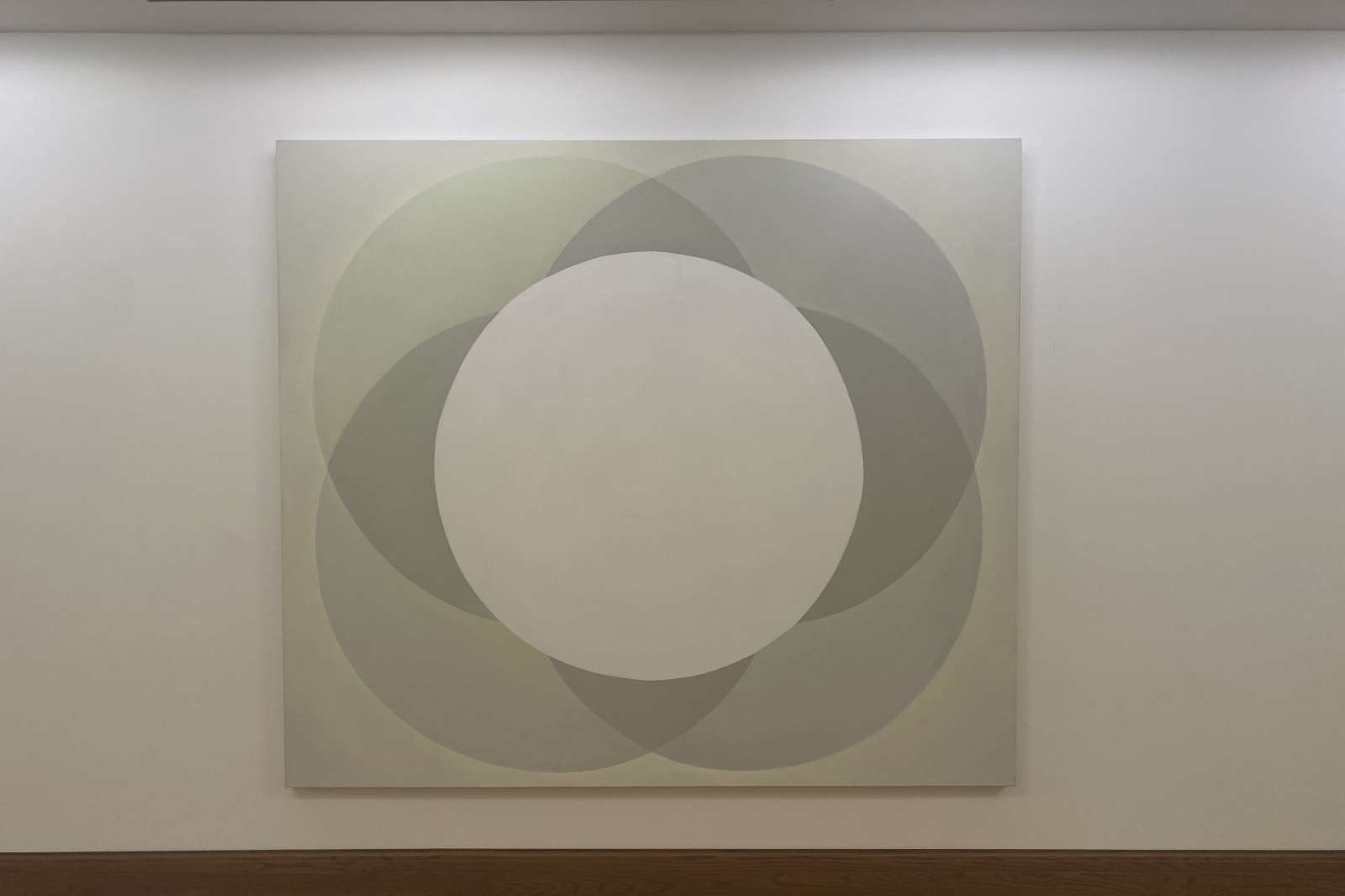 Byron Kim creates poignant works of art that are situated between abstraction and representation. Often working with a monochromatic or reduced palette, he engages with questions around the meaning of color and its perception through cultural and historic filters. Inspired by the abstract work of modern artists of the Postwar period such as Mark Rothko and Ad Reinhardt, Kim’s paintings demonstrate his keen interest in the subtleties of color, surface, and light. His works illustrate elusive ways of imbuing pure abstraction with cultural and social associations.

This painting, Irwin’s Disc, reflects Kim’s deep admiration for the influential work of American artist Robert Irwin (b. 1928), who has investigated human perception through his paintings, sculptures, and site-specific installations since the 1950s. Irwin was born in Long Beach and has spent the major part of his career in Southern California, close to where Kim grew up and continues to spend time. An abiding interest in light and its rendering is shared by both artists.

Kim took one of Irwin’s disc paintings made in the early 1960s as a starting point for his own work. Characteristic for its play with light and shadow, the center of these works is softly lit from different angles, creating a cloverleaf pattern of shadows that make the disc appear to both recede into the wall and extend past its physical boundaries. Kim chose to work from a tiny reproduction of the work illustrated in Pictures of Nothing: Abstract Art since Pollock (2006), a book of final lectures by Kirk Varnedoe, a distinguished art historian and curator. Kim enlarged the image to the size of Irwin’s original work, and deliberately followed the color scheme of the copy. Taking into consideration Irwin’s reluctance towards the reproduction of his work, Kim embraced the misleading scale and color of the reproduced disc painting to create his own interpretation, emphasizing the subtle changes in the colored shadows that create a slight trompe l’oeil effect. Kim’s painting Irwin's Disc is both a homage and an interrogation of art, and its reproduction, highlighting the subjectivity of human perception.

About the artist: Byron Kim (b. 1961, La Jolla, CA) earned his B.A. in English literature at Yale University in 1983. He attended the Skowhegan School of Painting and Sculpture in the summer of 1986.

Over the last two decades, his paintings have been shown in numerous monographic and group exhibitions, as well as in biennials in the United States and abroad. Among Kim’s numerous awards are the Louise Nevelson Award in Art from the American Academy of Arts and Letters, New York (1993), the New York Foundation for the Arts Grant and the Louis Comfort Tiffany Foundation Award (1994), the National Endowment of the Arts Award (1995), the Joan Mitchell Foundation Grant (1997), the Alpert Award in the Arts (2008), a Guggenheim Fellowship (2017), and the Robert De Niro Sr. Prize (2019).  His works are in the permanent collections of the Art Institute of Chicago, IL; the Berkeley Art Museum, Berkeley, CA; the Blanton Museum of Art, Austin, TX; the M+ Museum, Hong Kong; the Museum of Fine Arts, Houston, TX; the Museum of Contemporary Art San Diego, La Jolla, CA; the National Gallery of Art, Washington, DC; the Pérez Art Museum, Miami; the San Francisco Museum of Modern Art, San Francisco, CA; the Tate Modern, London, UK; the Whitney Museum of American Art, NY; and the Worcester Art Museum, Worcester, MA; and various other museums. Currently, Kim is a senior critic at the Yale School of Art, and he lives and works in Brooklyn, NY, and San Diego, CA.