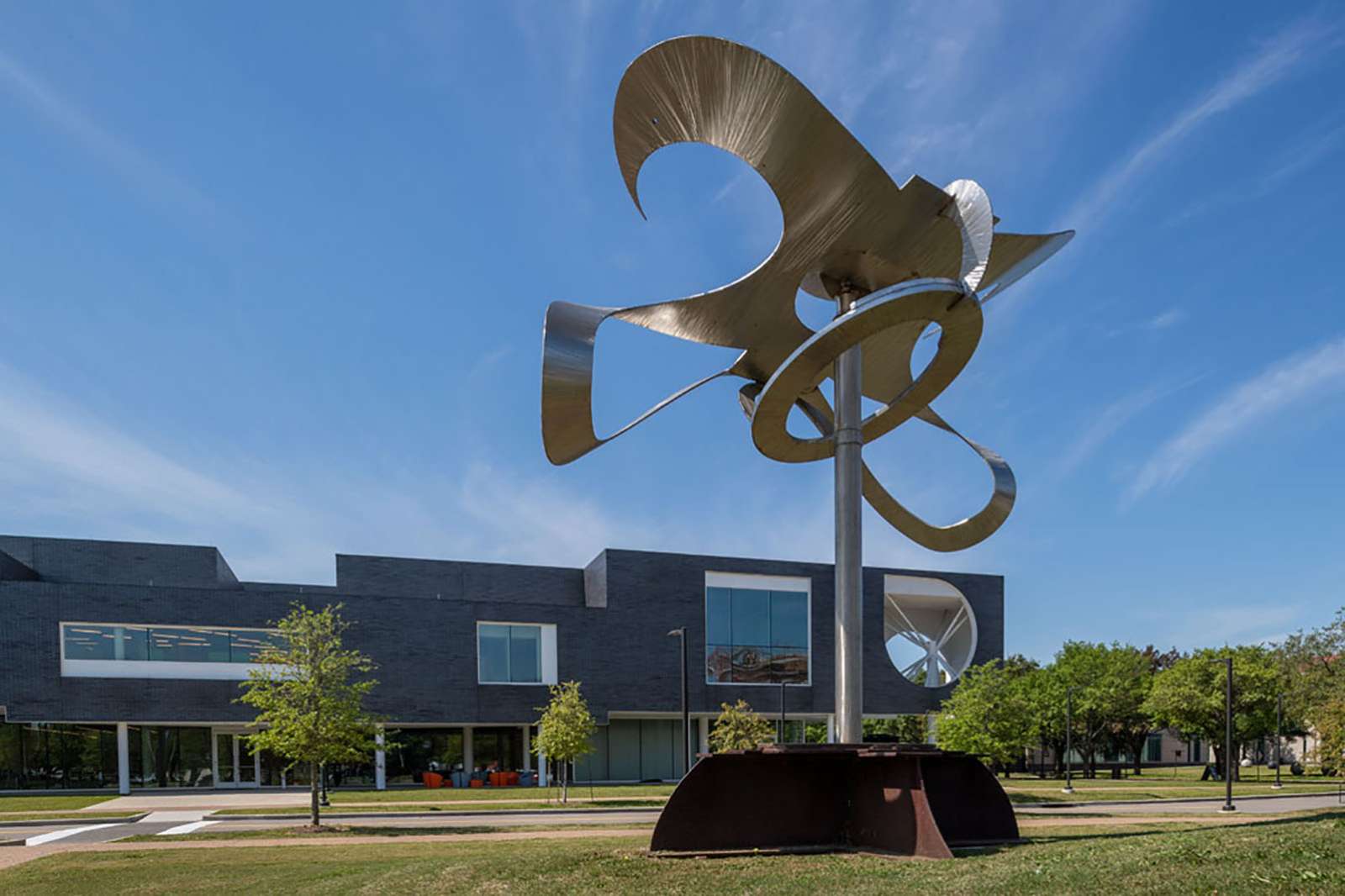 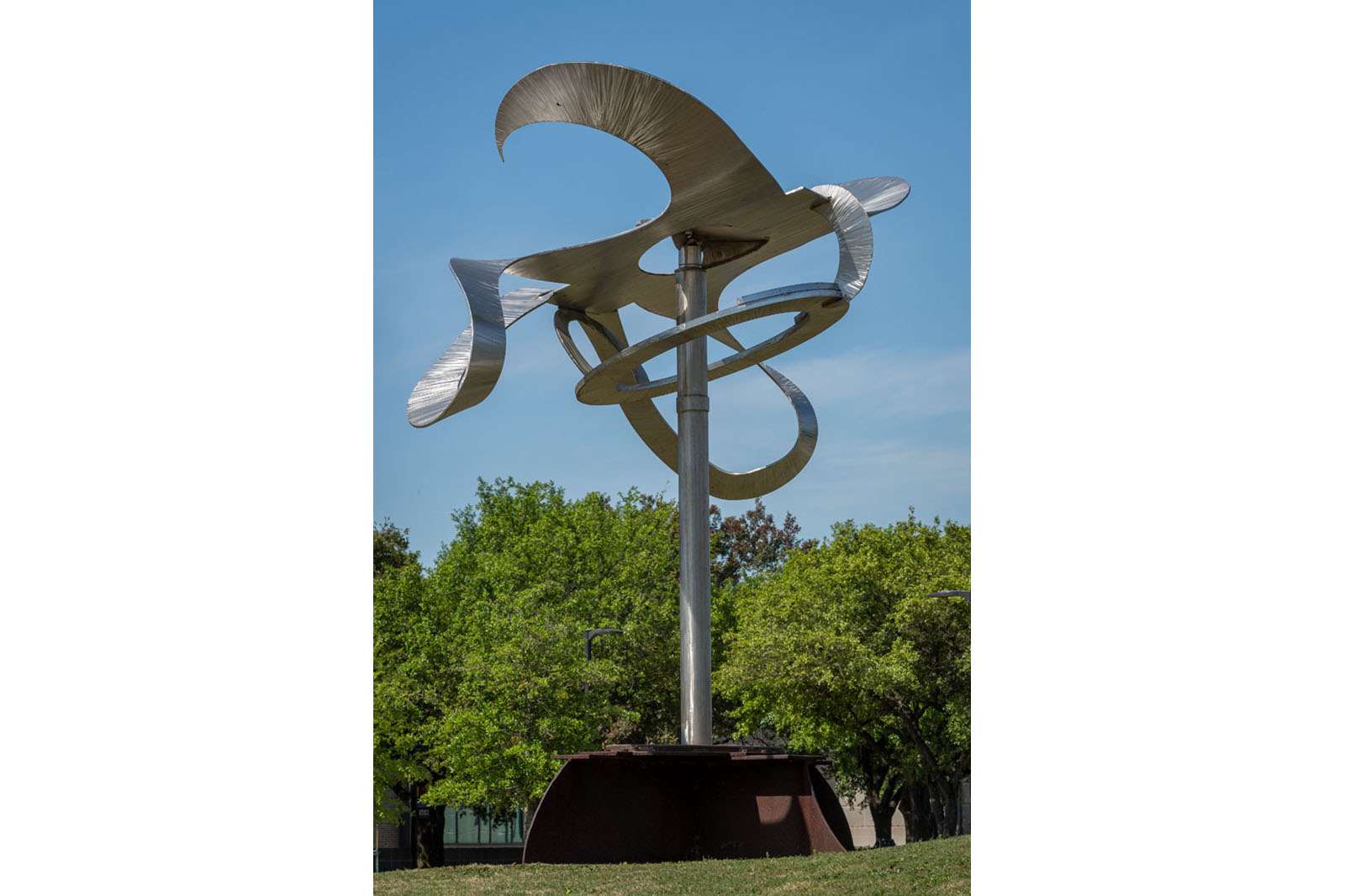 Arguably the most celebrated and widely exhibited living public sculptor in the world, Mark di Suvero has been a lifelong activist for peace and civil rights. In the 1960s, early in the artist’s career, di Suvero frequently donated works to benefit the Congress on Racial Equality (CORE), one of the “Big Four” activist organizations of the Civil Rights Movement. Inspired in part by the great imbalance between Constitutionally-guaranteed rights and the treatment of African-Americans, some of the artist’s steel works at this time were characterized by balance, including one such work donated to CORE that featured a heavy object carefully balanced on the needle-like neck of a steel base. This sculpture accomplished only what physical laws allowed it to do: operate as best it could given specific—and very real—limitations.

These early balancing acts helped define di Suvero’s interest in the transformative power of material and movement. Po-um (Lyric), his twisted steel form for Rice, is named in response to correspondence the artists had the modernist poet Ezra Pound while he was living at St. Elizabeth’s Hospital from 1945-1958. The title of work comes from one such exchange, during which Di Suvero asked Pound if he could use the 1914 poem “Papyrus” as his inspiration, to which the poet wrote back “Yes, you may use the Po-um.” Weighing over six tons, the sculpture features a knot of abraded steel atop a narrow pole, balancing perfectly on its axis. While many of di Suvero’s public works only appear to be in a state of movement, Po-um (Lyric) physically moves with changes in wind and weather conditions, causing the top of the work to rotate very slightly. Over time this movement gives viewers the opportunity to see the sculpture in different configurations each time they encounter the work—a poetic gesture from an artist whose early interest in sculpture was formed by movement and winds of change.

About the artist: American artist Mark di Suvero (b. 1933, Shanghai, China) is one of the foremost sculptors and public artists of the 20th and 21st centuries. di Suvero is one of the most significant artists to emerge from the Abstract Expressionist era and his work is often characterized by the marriage of grand scale, industrial materials, and motion. The son of American expatriates, di Suvero immigrated to the United States in 1941 and earned his BA in Philosophy from the University of California, Berkeley in 1966. The artist’s work has been the subject of several major museum exhibitions and is included in more than 100 museum and public collections, including the Museum of Modern Art, the Metropolitan Museum of Art, Hirshhorn Museum and Sculpture Garden, Washington, D.C., Los Angeles County Museum of Art (LACMA), the Menil Collection, Houston, the Whitney Museum of American Art, and Storm King Art Center, where he has had three major exhibitions.

Mark di Suvero has been a career-long activist for peace and an avid supporter of emerging artists. Throughout his career, the artist has founded and helped establish several institutions intended to show work by emerging artists and sculptors, including Park Place Gallery, ConStruct, and Socrates Sculpture Park. In 2010, di Suvero earned the National Medal of Arts for his service and commitment to emerging artists, and in 2013 was awarded the Gold Medal by the Academy of Arts and Letters.