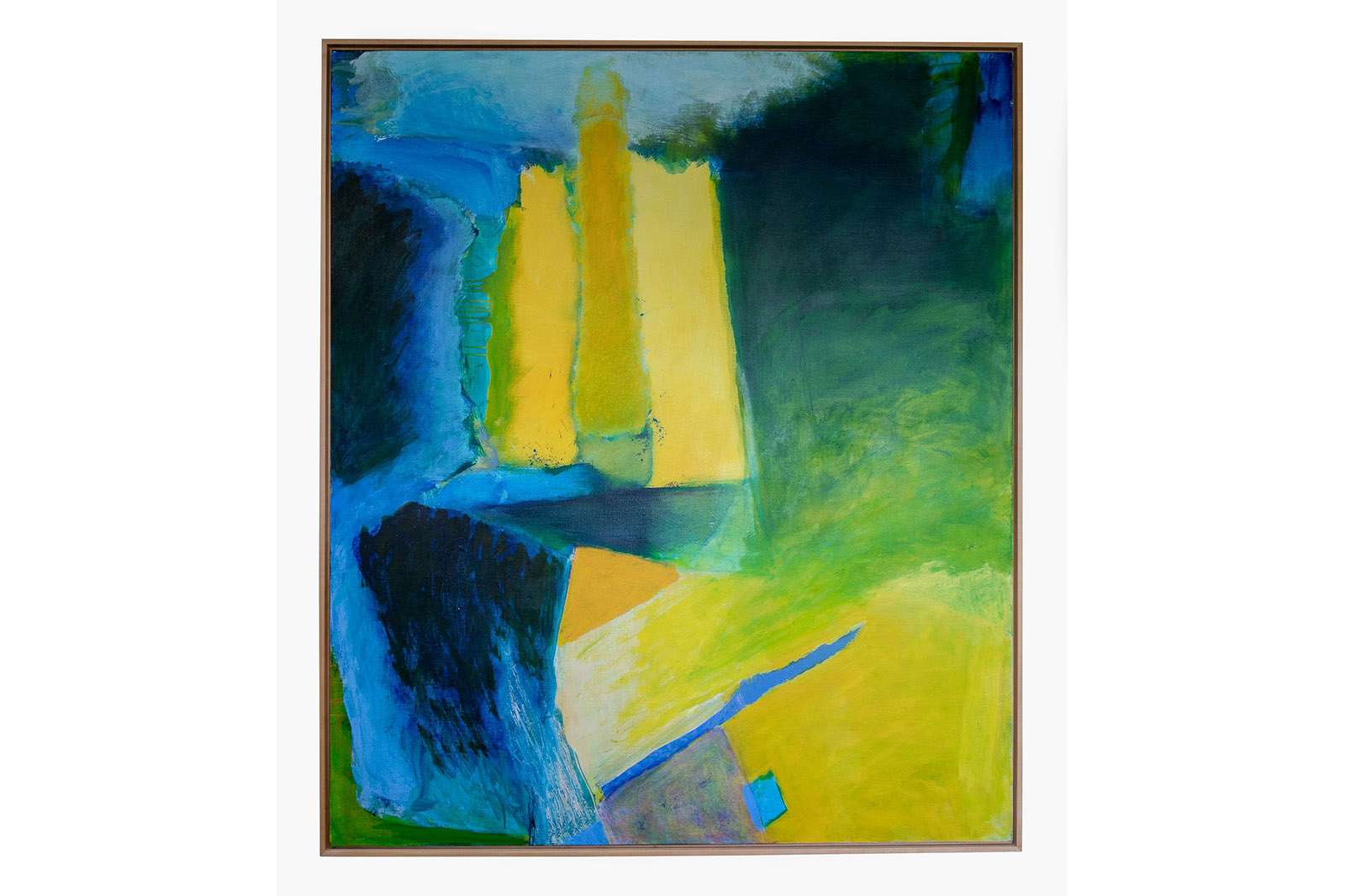 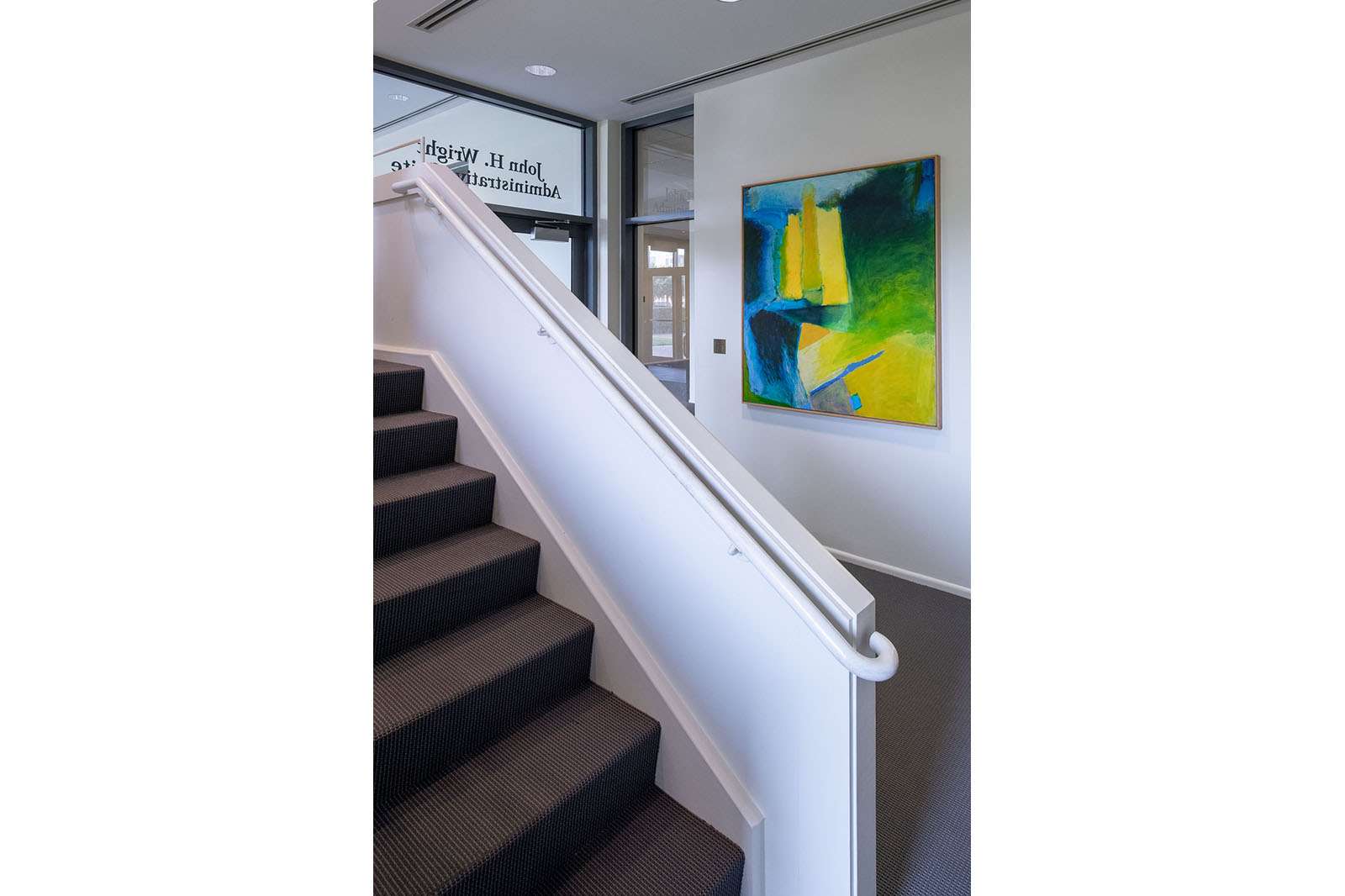 The American painter Emily Mason developed a unique style of chromatic, lyrical abstraction that drew from both Abstract Expressionism and Color Field painting, combining a gestural approach with the immersive character of large areas of amorphous color. Her method involved an element of chance, as she did not plan out the painting in advance. She started by pouring thin layers of vibrant paint directly from tins, then manipulated the canvas to let the colors run freely. Subsequently, she would rework certain painted areas to achieve different saturations and hues, thus controlling the final appearance.

Despite the large spans of luminous color and fortuitous pouring, Mason’s paintings reveal a sense of structure, enhanced by the juxtaposition of contrasting hues that create an enchanting and dynamic surface. Although she worked in an abstract mode, her paintings evoke forms that derive from both memory and inspiration found in nature.

In Sacred Emblem, Mason used a limited palette of blue, green and yellow hues, but by varying the saturation of each color she created a luminous, vibrant composition that seems to glow from within. The broad yellow areas form almost geometric shapes that generate a pulsing center on the canvas that draws the viewer in. The vigorous brushstrokes in Sacred Emblem speak to the energy deployed by the artist while working the paint. The vivacious yellow radiates warmth and conveys the spiritual side of nature, as emphasized by the title of the work.

Displayed next to the student lounge in the Shepherd School of Music, Sacred Emblem echoes through its engaging color palette the creative, lyrical energy in the building. The radiant green and blue hues resonate with the lush green colors found on the Rice campus, as well as with the changing light patterns of James Turrell’s Twilight Epiphany Skyspace, located in close proximity.

About the artist: Over a career spanning six decades, American painter and teacher Emily Mason (1932 – 2019) created a rich body of work composed of abstract polychromatic canvases. She was born into an artistic milieu, the daughter of the painter Alice Trumbull Mason (1904 – 1971) who was a co-founder of the American Abstract Artists, and a descendant of the Revolutionary-era painter John Trumbull. Emily Mason attended Bennington College in Vermont in 1950-52, which was famous for its liberal arts program and counts several modern artists, especially women, among their alumni. Mason then enrolled at Cooper Union in New York City, graduating in 1955. She was awarded a Fulbright Grant in 1956 to spend time in Italy, and notably studied at the Accademia di Belle Arti in Venice. She married fellow painter Wolf Kahn and began to split her time between Vermont and New York starting in the 1960s. Her first solo exhibition took place in 1960 at the Area Gallery in New York, followed by numerous solo exhibitions around the country in the following decades. In 1979, she was awarded the Ranger Fund Purchase Prize by the National Academy. In addition to her artistic practice, Mason taught at Hunter College in New York for more than 25 years.