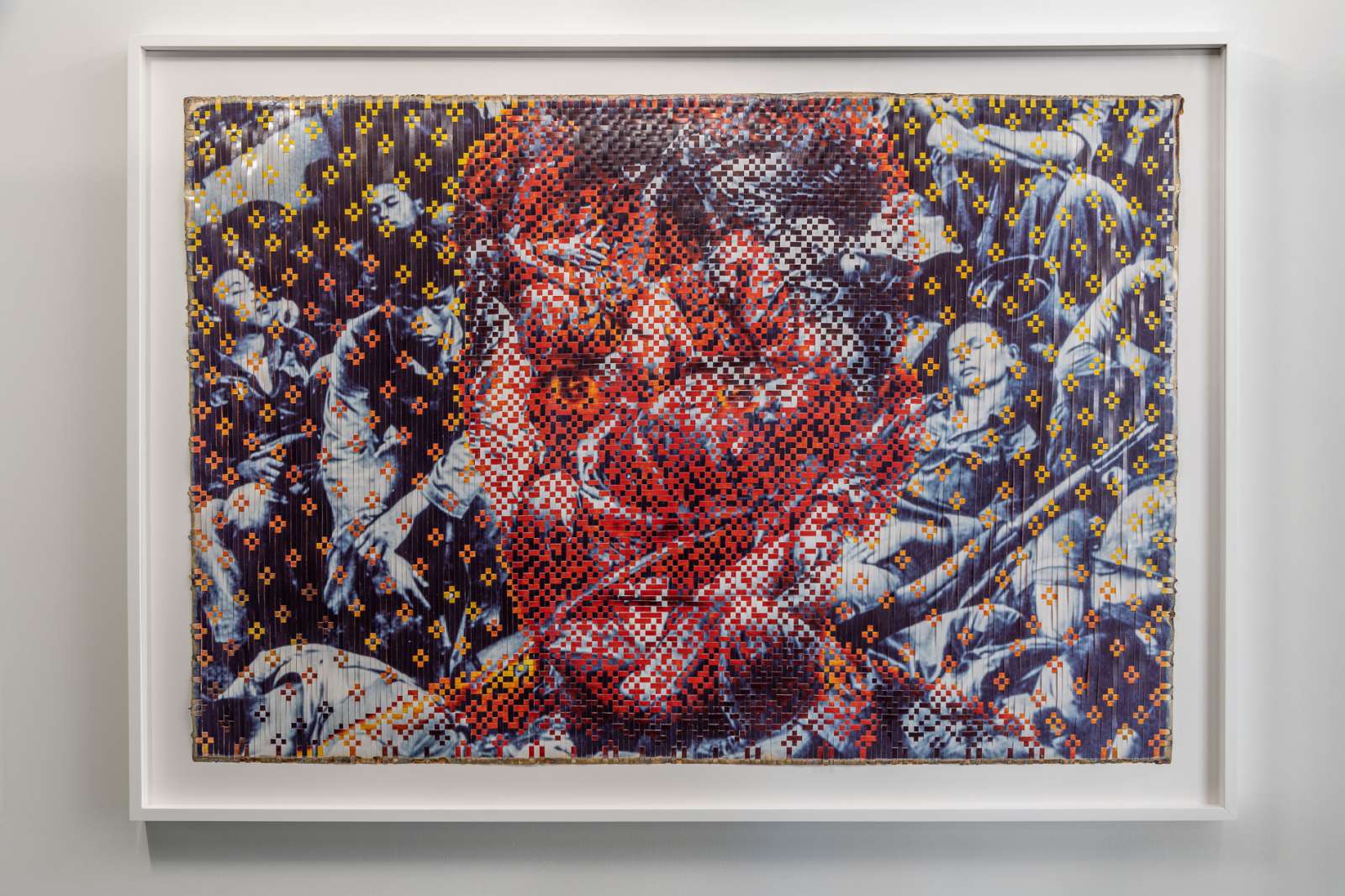 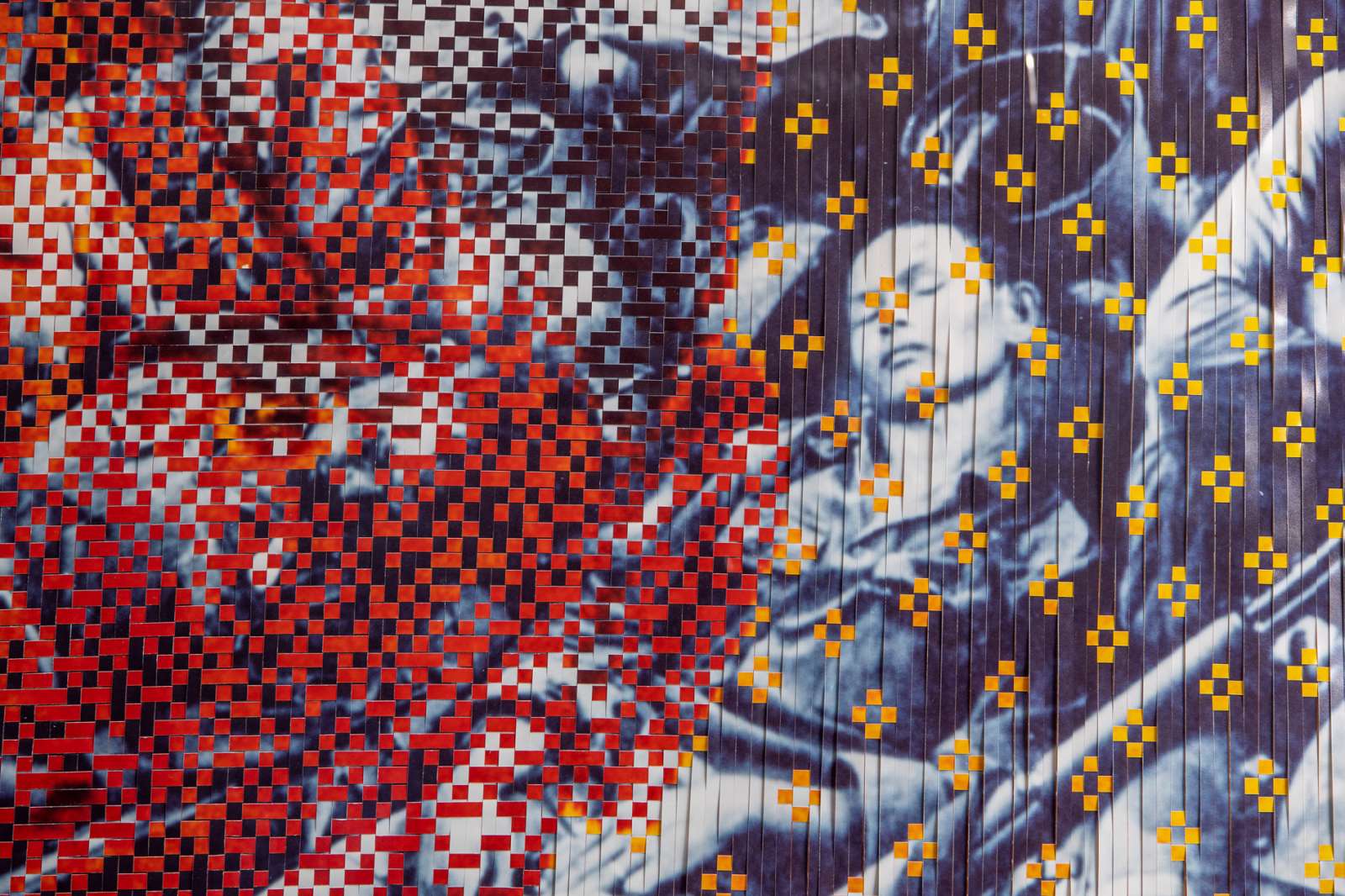 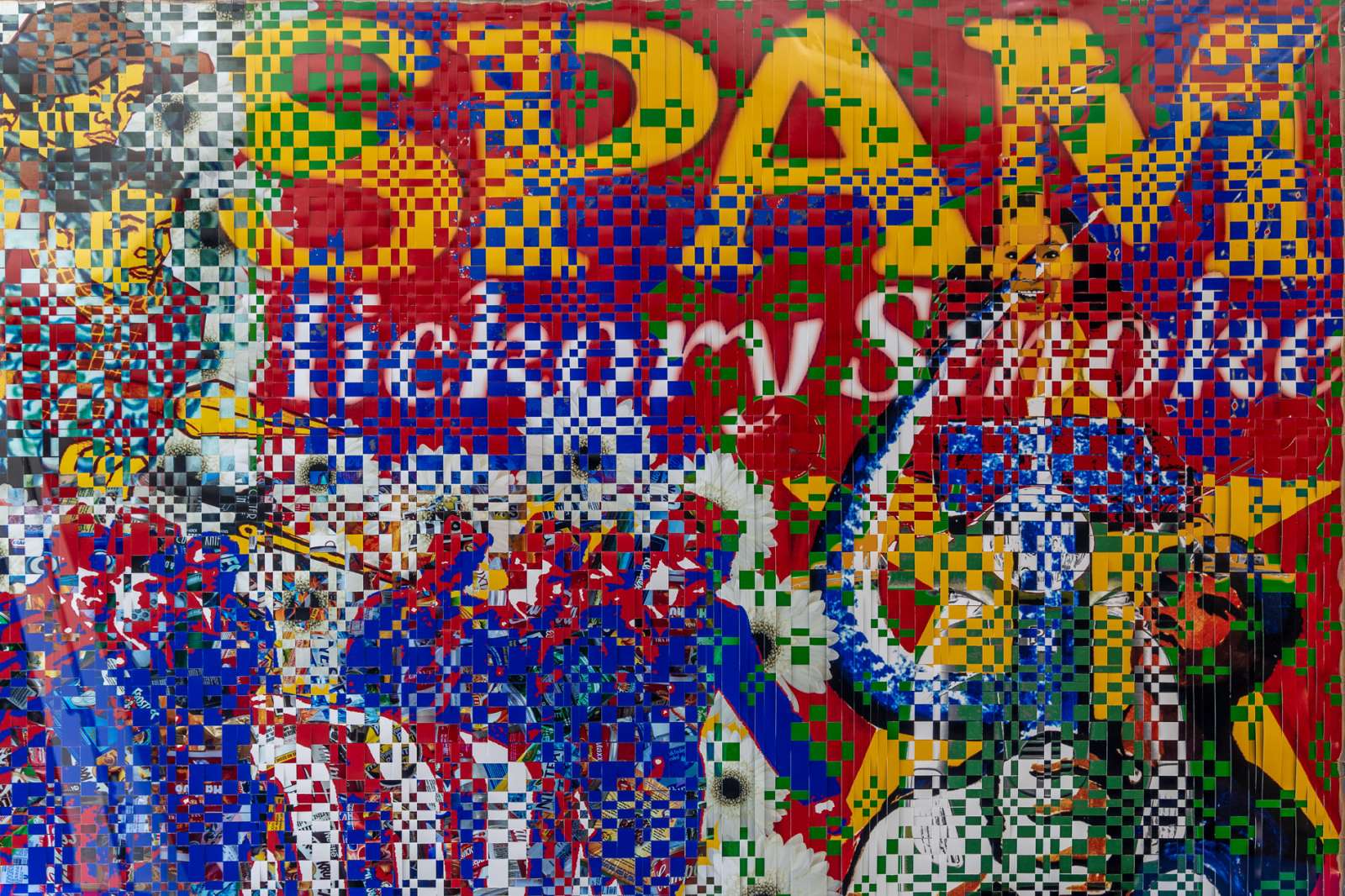 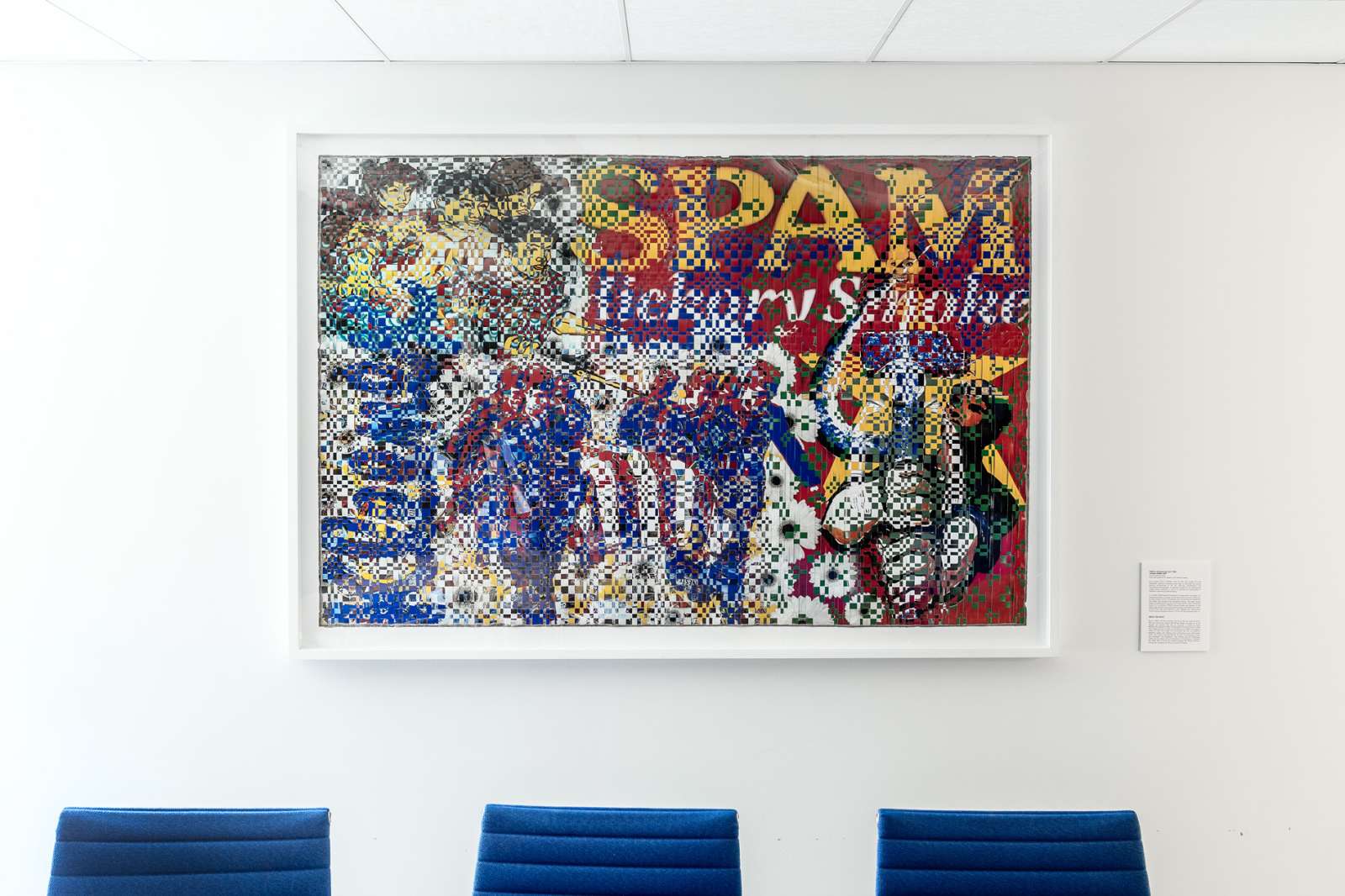 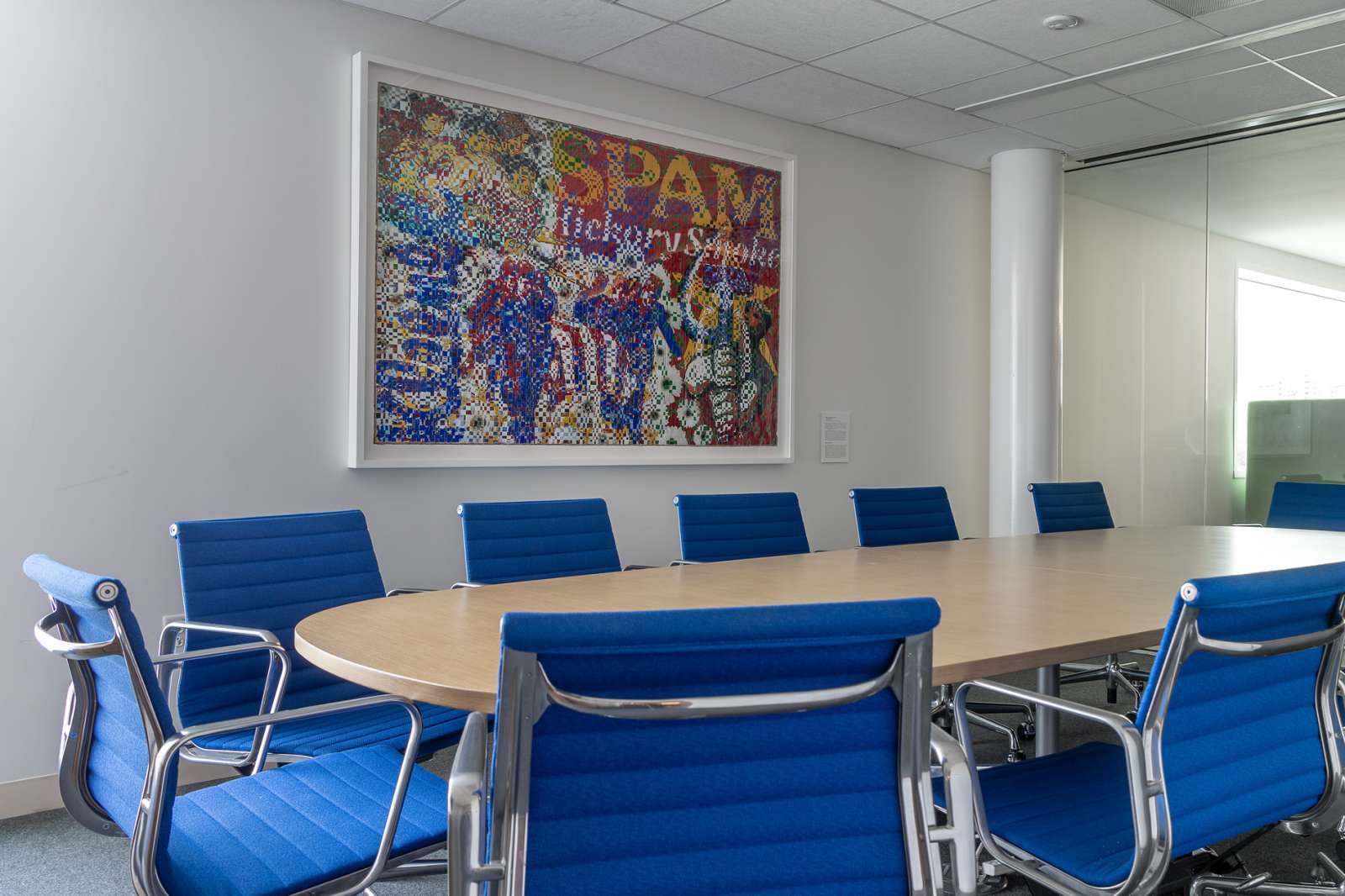 The multimedia artist Dinh Q. Lê is well-known for his works that combine photography and photo-weaving and reflect on the history of Vietnam, issues of war and displacement, as well as highlight cultural stereotypes. Born during the Vietnam War and having suffered the loss of his siblings during his family’s escape to the United States, the artist creates connections between the past and present. Lê draws from ancient Vietnamese traditions, such as weaving grass mats, a technique he learned as a young child from his aunt. He interlaces vertical and horizontal strips of documentary photographs and Hollywood film stills about the Vietnam War to create poignant images that commemorate and reconcile his own history and that of his country of birth.

Works in his Persistent of Memory series represent how Lê addresses the present and future by examining the past. In Untitled (Persistence of Memory #7), the artist uses his signature photo-weaving technique to create a superimposition of two distinct prints. The woven pattern reveals a background of people laying on the ground, exhausted and seemingly wounded. Across the surface, squared crosses are set in an orderly pattern until they near the center, where they form an image illustrating the head and shoulders of a young man, whose features can only be “seen” by moving around the work. The stark composition and the gaze of the young man remind the viewers of the lives lost during the Vietnam War and how the armed conflict haunts the memories of the living.

Untitled (SPAM) represents a visually complex composition, achieved through the weaving of different prints, revealing various layers and fragmented images. A group of American soldiers carrying a draped coffin occupies the center. Other parts represent Vietnamese fighters, a figure holding a hammer and sickle, and logos of American products across the surface reading: “SPAM, Hickory Smoke, and Kleenex.” The use of bold colors is reminiscent of Pop-Art and comic-book aesthetics. In the upper right corner, the face of a young Vietnamese girl appears, conjuring the image of Phan Thị Kim Phúc, the child in the 1972 photograph “Napalm Girl.” The combined elements combined make multiple connections to the past as well as to contemporary consumerism, highlighting the deep impact of war and how it permeates society.

Dinh Q. Lê (b. 1968, Hà Tiên, Vietnam) left his birth country as a child when his family fled the Communist regime and the Khmer Rouge and settled in the United States. He received a BA from the University of California, Santa Barbara, and holds an MFA in photography from the School of Visual Arts, New York. Lê’s works have been included in numerous group and solo exhibitions, such as at Asia Society, New York (2005); at the Museum of Modern Art, New York (2010); documenta13 in Kassel, Germany (2012), and the Carnegie International at the Carnegie Museum of Art, Pittsburgh (2013). Lê’s artworks are included in various collections such as the Museum of Modern Art; Carnegie Museum of Art; Los Angeles County Museum of Art; the San Francisco Museum of Modern Art; and the University of Michigan Museum of Art, Ann Arbor, among others. In 2007, Lê was one of the co-founders of the non-profit art space Sàn Art (Ho Chi Minh City). In 2010, Lê was honored with an award from the Prince Claus Fund for his artistic practice and contribution to the development of contemporary art in Vietnam. In 2014, Lê created and exhibited the site-specific installation Crossing the Farther Shore at the Rice Gallery. Lê lives and works in Ho Chi Minh City, Vietnam.